The Eleven was such a successful and beautiful design that beginning in 1982, Westfield Sportscars started production of a replica with a fiberglass body, available as either a finished car or a kit car. Called the Westfield Sports, the factory-finished cars were usually fitted with an uprated 1,275 cc BMC "A" engine (the same engine that was used by such classics as the MG Midget and the Austin-Healey Sprite), although some factory cars were fitted with Ford Kent engines. Kit cars were sold without engines, and owners have fitted anything from the Coventry Climax to Lotus twincams and Alfa Romeo engines to the chassis. In any event these replicas should never be confused with cars built by Lotus, which was never connected with the Westfield or other imitators.

In 1983, the magazine Road & Track featured an article about the Westfield XI replica, telling the story of how the magazine's team built a kit car and subsequently took it for a 5,000-mile (8,000 km) cross-country trip from California to Wisconsin. The article is said to have sold more Westfields than anything else the company could do to advertise their cars . 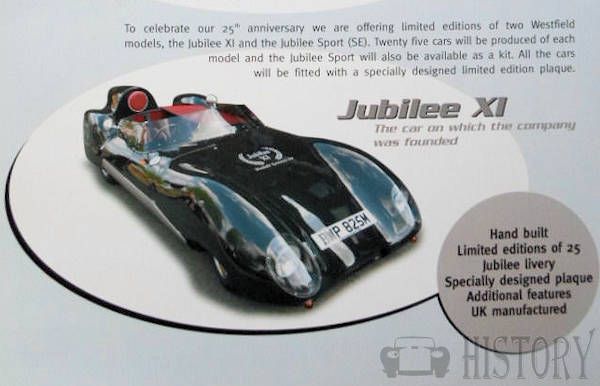