The Volvo 480 is an automobile made by Volvo Cars. It was the first front-wheel drive car made by the automaker. The 480 was available only in one body style on a automobile platform related to the Volvo 440/460 five-door hatchback and four-door sedan models. It features an unusual 4-seat, 3-door hatchback body, somewhere between liftback and estate in form. The 480 was marketed as a coupé in Europe starting in 1986 and the U.S. as a 2+2 "sports wagon" in the fall 1987. It was built in Born, Netherlands, until 1995.

Volvo took six years from the time the 480 was conceived, through its development, and finally brought to production readiness. The press launch was on October 15, 1985, but the 480 was first put on public show at Geneva in 1986, becoming available to the buyers in 1987. The automaker described the car as a four-seater with sporty styling and the first front wheel driven Volvo. The press described it as having a "sleek hatch body" in contrast to Volvo's traditional "boxcar look". The 480 was the first Volvo of its style since the P1800ES, and the last until the unveiling of the C30. All of these models featured a frameless glass hatch for cargo access.

The 480 was produced in Born, Netherlands, at the factory that built DAF cars, including the DAF 66-based Volvo 66, and later, the Volvo 300 Series. The 480 shared the platform of the Volvo 440 and 460 models. It was originally planned for the North American market (evidenced by its US-spec front and rear side markers, not used on European automobiles). Volvo also claimed that it was one of the first cars sold in Europe featuring bumpers designed to comply with U.S. National Highway Traffic Safety Administration (NHTSA) regulations to withstand a 5-mile-per-hour (8 km/h) front rear impact without damage to the engine, lights, and safety equipment. This was the only Volvo to feature pop-up headlamps for better aerodynamics.

The concept was to market a modern, compact front wheel drive car with a unique low-slung design targeting buyers "between 25 and 40, probably with a higher than average education and with a career." Designed by Volvo's Dutch subsidiary, the "sporty 480 ES coupe" was introduced to change the automaker's "frumpy image" and into the "yuppie" market segment.

Volvo highlighted that the car was "well-endowed with advanced electronics" and the automaker's press release described in detail the numerous features. However, the necessary technology was still crude, and the 480 suffered electrical problems and the central electronics module needed to be replaced. Early cars also had water leaks. It is common to find 480s with a water filled spare wheel well. This is largely due to poor sealing of the glass hatch and deterioration of the rear light cluster seals. The rear lights themselves often discolour and are notoriously brittle.

The 480 had good handling, due in part to its Lotus-designed suspension. The normally aspirated Renault engines were reliable.

The 1987 models were available with an anti-locking brake system (ABS) as an optional extra.

In 1992, the 480 received new mirrors, headrests for the back seats, as well as subtle modifications to the trim and body-colour bumpers. The 2.0 naturally aspirated engine was also introduced. Changes between the CEM (Central Electronic Module) are externally apparent with the introduction of a total closure system whereby the key can be held in the lock position to close the windows and (where fitted) sunroof. Earlier CEM modules feature a "passing" function for the wipers, whereby fully depressing the accelerator pedal will switch intermittent wipers to full.

Early 1992 saw the release of special editions; 1994 saw the UK release of the "Celebration" limited edition of 480 specially equipped and numbered cars. In 1994 the 480 was updated further with clear front turn signals. Production ended on 7 September 1995 with about 80,463 units produced.

Writing about the demise of the 480 in Car Magazine, journalist Richard Bremner wrote about the car's decent power and low weight combination. "This meant there was some danger of a sporty steer — pretty radical from a company that considered having fun at the wheel as acceptable as seducing a nun," he commented. "Good grief, a Volvo worth preserving. And there aren't many of them." He also commented on the last UK versions as, "And Celebration it was too, as Europe waved goodbye to the badly built, pointless, DAF coupe with an outrageous asking price of £16,500. That paid for the CD player, alloys, leather and a pointless hallmarked plaque glued to the dashboard."

Today, the 480 can be viewed as "officially cool" and a genuine piece of Volvo history, it "was no sports car" with most being "ridiculously underpowered" and available to collectors "at rock bottom" prices.

The 480 factory also made several prototypes, including a 480 with an electric drivetrain, a supercharged version (G-Lader), a version with a 16-valve engine and a version with a turbocharged 2.0 L engine. A convertible was also announced to the press in summer 1987, but not seen in public until the 1990 Geneva Motor Show. It was planned to be launched at the beginning of 1991, but it did not make production after a supplier declared bankruptcy and concerns over roll-over safety protection 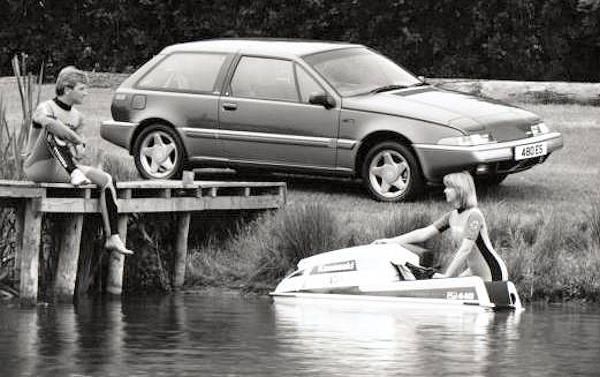