The Volvo 300 Series is a rear wheel drive automobile sold as both a hatchback and (later) a conventional saloon from 1976 to 1991. It was launched in the Netherlands shortly after Volvo acquired a major stake in the passenger car division of DAF in 1973. The series consisted of the Volvo 340 (initially badged as the 343/345) and the later Volvo 360.

The 300 series was unusual in having the gearbox mounted over the rear axle (which was of the De Dion tube type), with the 2 liter models having the driveshaft enclosed in a "torque tube". The rear-mounted gearbox helped with weight distribution but resulted in an unusually large transmission tunnel, especially by comparison with then-contemporary front wheel drive competitors such as the Mk. III Ford Escort and the Opel Kadett E/Mk. II Vauxhall Astra.

Overall, the 300 series was considered heavy and unrewarding to drive but reliable and safe by the standards of its day. However, early 360GLT versions were well regarded by more enthusiastic drivers, with the unusual gearbox location ensuring good weight distribution and unusually good balance and traction.

After building a series of compact cars, DAF sought a partner to bring its new larger model, codenamed P900 and intended to become the DAF 77, to market in 1970. Several manufacturers were approached, including Audi, BMW, and Volvo. Volvo was not originally interested due to the cost, but they were later persuaded by DAF's access to Renault engines. This helped Volvo expand its model line-up without the large expenditures associated with developing a new model. Building cars in the Netherlands also helped the Swedish Volvo to access the markets of the EEC, of which Sweden was then not yet a member.

The Volvo 343 was introduced in 1975. DAF had already begun development of this car as a replacement for the Volvo (previously DAF) 66. It was fitted with a 1.4 litre Renault engine in the front and DAF's radical Variomatic continuously variable transmission unusually mounted in the rear, helping weight distribution. To add to the appeal of the car, Volvo adapted the M45 manual transmission from the 200 series to fit in place of the CVT, and was sold alongside the CVT models from 1979. A five-door model, the 345, was added in 1980. In around 1980 also larger wrap around bumpers were introduced. 1981 saw the addition of an additional engine option, the Volvo designed B19, only available with the manual transmission. A revised bonnet, grille and front lamp arrangement and slightly different wings signalled a facelift in 1981, which also gave the car a new dashboard and revised interior.

It was one of the first hatchbacks of this size to be produced in Europe, following the trend set by the original Volkswagen Golf in 1974.

In around 1985 a further facelift was introduced. Amongst other small changes, (optionally body coloured) wrap-around bumpers with the indicator repeaters attached to them were fitted. Instrumentation changed from Smiths units to VDO. The older Volvo redblock engines in the 360 were upgraded to the low friction B200 unit. Capacities and outputs remained much the same. The carburettor version was designated B200K and the Bosch LE-Jet fuel injected version is known as the B200E.

From 1987 on, incremental improvements in features and emissions control were made. Production of the 300 series ended in 1991, despite the fact it was supposedly replaced by the Volvo 440 in 1987.

A famous advertisement for the 300 series in the late 1980s saw a crash test dummy "come alive", and drive a 340 out of a second floor factory window, nose-diving into the concrete ground.

The last ever car of the Volvo 300 series (a white Volvo 340) rolled off the production line on 13 March 1991, three years after the launch of the 400 Series model which was designed as its replacement.

A diesel engine for the 340 developing 54 PS (40 kW), was only available in certain markets and was added to the 340 models in 1984. This diesel was a Renault F-series (like the petrol 1.7), and was available with a 1.6 litre naturally aspirated engine only - called the "D16" in Volvo's internal parlance. While these diesel models were never offered in the UK, they were offered in right-hand drive form in Ireland. In 1985 a 360 diesel was made available with the same exact mechanics. The diesel was discontinued in 1989. Volvo also experimented with LPG tanks, a feature of which was made available in 1979 with the Volvo 343 and 345 but they were limited in LPG availability.

Like other Volvos, the 340 embodied many ground-breaking safety features which have since become standard on most cars. Sales began at a low level, not helped by the absence of a manual transmission option, but gradually increased as the lineup expanded. 1983 marked the first year that 300-series production broke the 100,000 barrier (102,000).

While the car was fundamentally robust, the detail build quality was never up to the same standard of Volvo's larger, Swedish-built models, coupled to the fact that the early Variomatic cars proved to be particularly troublesome. The Volvo badge however ensured that the car had a strong middle-class following (often as a second car) particularly in the UK in the 1980s, regularly making that country's top annual 20 sales tables for that decade, and they are still seen fairly often in the UK more than 20 years after production ceased. They are robust and mechanically simple (and therefore easy to maintain). Even the unpopular Variomatic transmissions are reliable given proper care. The rust protection was poorer than other Volvos, but the engines (especially the 1.4 and 2.0s) were quite durable.

An unusual feature of the car's design is the geometry of the rear axle. Two degrees of negative camber on the rear de Dion axle produces a similar stabilising effect as the expensive and complex Weissach axle launched by Porsche a year after the launch of the Volvo 343. The inherent stability of this design made the car popular with caravan owners, being voted Tow Car of the Year in 1985.

The Renault-sourced 1.7 litre engine suffers from a well-known problem where the carburetor mounting flange warps due to engine heat, causing a small air leak and subsequent running problems. This is easy to fix, requiring minor machining of the mating faces.

The Volvo 300 has experienced something of a renaissance in recent years with a number of very active websites across Europe. A strong, young following has developed attracted by a rear wheel drive car which is very cheap to buy, insure and relatively easy to work on. In the UK, despite being unsuitable for professional drifting, many 300s (because of their low price) have found popularity amongst the amateur drifting community. Known as "trampdrifting," old bangers are modified to drift at a minimal cost and are discarded once they reach the end of their usefulness.

It was not sold in North America. The Volvo 360GLT only was introduced in Australia and New Zealand during 1984, and lasted until 1988.

The 300 series was available in a variety of different trim levels throughout its production life. There were also a number of special editions produced throughout the lifetime of the 300 series as well.

One such variation on a theme was the 343 R-Sport. This was intended as a sporty offering to the line-up, pre-dating the introduction of the 360GLT by some two years (the R-Sport was introduced in 1981). Only 100 cars were produced, being based on the DLS and GLS trim levels and featuring sporting additions such as self-adhesive 'R-Sport' decals, rev counter, front and rear spoilers and some featuring body coloured bumpers and alloy wheels. The B19A engine also featured some modifications, including twin Solex carburettors. Power was increased from a quoted 95HP to 122HP.

A similar model was the 343 Oettinger. This model was based on the standard 343 DL, with the 1347cc capacity increased to 1596cc. The Oettinger was modified by the VW Audi Group tuning company Oettinger, and was released in 1979. The 343 Oettinger was available in both red and silver metallic. Only 125 cars were produced.

Another model of note is the Millionaire. This model was introduced in 1988 to commemorate the production of the one million car in the 300 series. Available on both the 340GLE and 360 GLE/T, the Millionaire model featured virtually a full specification including air conditioning, electric front windows and mirrors, alloy wheels and leather interior.

There are a few variations of the Volvo 300 series that never made production:

The Volvo 340 estate and a convertible were both built as design studies, but neither was put into production. A van version was also considered, and did eventually make production. The van was essentially a five-door 340, but with both windows on the rear doors replaced with body-coloured metal and with the rear seats removed. It was called "Volvo 345 Van" and most of these 345 Vans were bought for commercial use by the Dutch Postal Services.

The convertible version of the Volvo 340 was mooted, but only exists as a clay model. However, a few 340 convertibles exist, as a result of aftermarket conversions carried out by specialist companies after purchase.

Another model of note was the 363 CS.

Named for 'Competition Services', to indicate a high-performance version, the 363 CS was based on the three-door bodyshell and fitted with the B27F 2.7 litre V6 PRV engine as used in the Volvo 260 series. The gearbox was a five-speed Alfa Romeo unit, as Volvo did not have a suitable design which would fit a transaxle-design. One prototype was built which was painted in metallic silver with black and orange 'Starsky and Hutch'-style stripes down both sides. Flared wheelarches and orange-painted, multi-spoke alloy wheels were also added to complete the sporty look.

Top Gear co-host Jeremy Clarkson nurtured a long hatred for the 340. In a 1992 episode, as a preamble to a road test of the then-new Volvo 850, he had one destroyed in a scrap metal shredder. In another episode, he intentionally crashed one against a tree as he pointed out Volvo's reputation for safety.

The Volvo 300 Series in motorsport

Despite the 'geriatric' image the 300-series gained over the years, it had some quite successful appearances in motorsport. For instance, a heavily tuned version (using Alpine/Gordini cross-flow engines bored out to 1770 cc) was driven by Per-Inge Walfridsson to win the European Championship of Rallycross in 1980. In the UK, several Volvo 360 GLT models can be seen in action on Road-Rally events.

The Volvo 360 GLT also participated in a 24 hour endurance record breaking run at the Surfers Paradise raceway in Queensland, Australia to showcase the introduction of the model in Australia in 1984. This exact same Volvo 360 GLT was later converted to rallying specifications and participated in many Australia rally events and is still running in 2009 as a rally car. 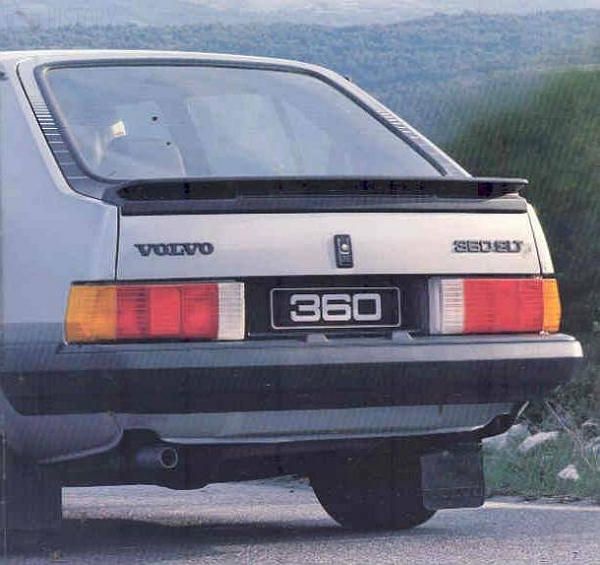