Jan Wilsgaard designed what would eventually become the 164 in the late 1950s as a concept car called the P358 and powered by a V8 engine. The front styling was inspired both by the Wolseley 6/99 and the Volvo P1900.

In 1968 Volvo introduced the 164 as a luxury version of their 140 series. The wings, the grille, the front bumper, the bonnet, the headlamp bezels, and the front indicators were all unique to the 164; to accommodate the long 3-litre 6-cylinder engine the 164's wings and bonnet were longer than those of the 4-cylinder 140, but the overall height and width of the 164 were the same as the 140 series. The interior featured a simulated woodgrain dashboard face and leather seating surfaces. Introduced the same year as the BMW E3, the 164 was Volvo's answer to the Mercedes-Benz 250 and Jaguar XJ6 Despite being relatively heavy, the 164 gave favourable fuel economy compared to other 6-cylinder European cars of similar dimensions such as the BMW 530.

In 1973 the 164 received a facelift including new rear and side lamps, a new grille and front bumper, new flush-mounted lift-type exterior door handles, new wing mirrors, and a new instrument cluster and dashboard which included air ducts. In 1974 the vent wings were eliminated from the front doors, and the 164 became one of the earliest cars to offer heated seats. For the final model year of 1975, the 164 received new larger 6-panel rear lamps, new front seats, a new style of badging, extensive changes to the rear suspension, and the parking brake handle was moved from outboard to inboard of the driving seat.

The 164 was powered by a 3-litre overhead-valve B30 engine, a 6-cylinder derivative of the B20 4-cylinder engine that powered most other Volvo models.

1969–1971 models were all equipped with dual Zenith Stromberg 175CD2SE constant-depression carburettors. In 1972, Bosch's first volume-production electronic fuel injection system, D-Jetronic, was offered as optional equipment. Carburettors were dropped and "D-Jet" became standard equipment for the 1973 model year. Cars equipped with the fuel injection were badged as 164E models, the "E" standing for einspritzung (German for "fuel injection"). Like other fuel-injected Volvos, the 164E models gave improved performance and driveability with less toxic exhaust than their carbureted counterparts.

Transmission options included a manual 4-speed M400 gearbox, which was known as the M410 when equipped with the optional electrically operated Laycock de Normanville overdrive. Both the M400 and M410 had Volvo's "remote control" shifter, which used a conventionally short, vertical shift stick placed between the front seats; manual-shift models other than the 164 and the P1800 continued until 1971 to use Volvo's direct-control shifter with an extremely long, almost horizontal shift lever with its pivot point well under the dashboard. A 3-speed automatic transmission, the BW35 made by Borg-Warner, was also offered. The automatic shift selector was mounted on the steering column from 1969 through 1971, and on the floor from 1972 through 1975. Despite its rough operation and inefficiency, the BW35 was popular in the North American and Australian markets.

The 164 was offered only as a 4-door sedan, and shares many body and chassis components with the 144. Despite strenuous calls from Volvo dealers for a 6-cylinder Volvo station wagon, including a prototype built in Melbourne, Australia in 1972 [and which is now under going a full restoration by a Volvo collector in Melbourne] and possibly another in South Africa, an estate version of the 164 was never offered. Because of the shared components between the 140 and 164, several private parties have constructed station wagon and 2-door hardtop versions with 164 front ends. From the cowl rearward, body sheetmetal is identical with the exception of the remote shifter transmission tunnel, which was added to the 140 series in 1972. The front of the 164 was extended 60 cm and the wheelbase gained 10 cm to accommodate the length of the 6-cylinder engine. 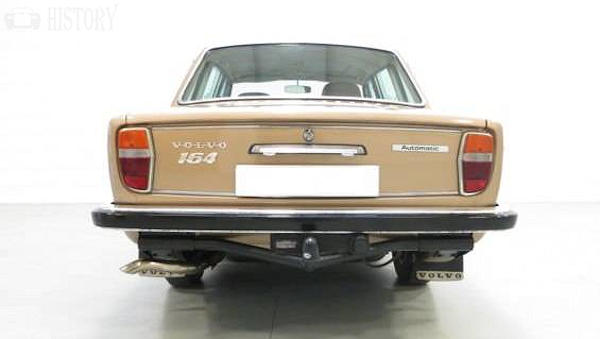