Volvo Cars began manufacturing the Volvo 144 at Torslandaverken in the late summer of 1966 for the 1967 model year. The 144 series, which followed the Volvo Amazon (replacing it in its 4th model year), was the first Volvo to use a tri-digit nomenclature, indicating series, number of cylinders and number of doors. Thus, a "144" was a 1st series, 4-cylinder, 4-door sedan. The 144 was the first Volvo to feature a more rectilinear or boxy styling. Compared to the Volvo Amazon, the 140 was a radical departure with minimal exterior and interior carryover, notably a stylised version of the front split grille. The car's basic shape would survive into the 1990s as the 200 series. Mechanically, the car used many of the same drivetrain components as the Amazon, but also showcased many improvements, including disc brakes on all four wheels. It was named car of the year in 1966 by Swedish magazine Teknikens Värld. The engine in the standard 144 was the same as found in the standard Amazon (121), the 1.8l B18A, but the 144S was given the more powerful B18B from the 123GT and 1800S. Late in the 1967 model year the 142 (2-door sedan) began production, in time to build 1500 units for the first year. In 1968 the Volvo 145 5-door station wagon began production, completing the 3 body styles used in the 140 range.

For the 1969 model year Volvo enlarged the B18 to become the 2.0 litre B20 and replaced the generator with a more modern alternator. It was also in 1969 that Volvo introduced the 164, which shared much of the 140 series structure and styling aft of the windshield while incorporating a 6-cylinder engine, the B30 which was simply a B20 with 2 more cylinders and a few strengthened and enlarged components. Volvo also introduced the Express this year (see below).

In 1970 a flow-through ventilation system, where vents were added towards the rear of the car (on the exterior under the rear window on the 142 and 144 and as a grille next to the right side taillight of the 145) and electrically defrosted rear windows, were introduced. The split rear side window on the 145 became one piece which was no longer possible to open.

In 1971 the first of several styling changes were introduced, including a revised black grille which saw the now ubiquitous Volvo diagonal line introduced as well as new wheels. 1971 also saw the introduction of the B20E, which was a high compression version of the B20 which introduced Bosch D-Jetronic electronic fuel injection, giving a power figure of 100 kW SAE or 90 kW DIN. These new cars were either given the designation E (the German word Einspritzer, or "injection") or GL (for Grand Luxe), which was a more upmarket version of the car. A console on the transmission tunnel with a clock was now standard.

The styling changes continued in 1972 with the introduction of flush mounted door handles and a slightly revised dashboard with fake woodgrain trim, newly designed switches and a small central panel with a clock. The transmission tunnel was taken from the 164 as was the same short-shifter gear stick and the automatic transmission became controlled by a T-bar mounted on the floor at the same place. The outer 2 rear seats now had the mounting points for retractable seatbelts. A low compression fuel injected engine, the B20F was introduced for the US and certain other markets.

In 1973 the 140 series received a major facelift in 1973 with a new plastic grille, new larger indicators and a completely revised tail end. Also, the S designation was dropped and the range consisted of 3 trim levels, standard (with no designation, known as L, or "luxe") de Luxe and the most upmarket, Grand Luxe. The interior also had a completely revised dashboard with a new instrument cluster consisting of dials rather than the strip speedometer previously used, rocker switches replacing the push-pull switches (with the exception of the headlight switch), and vents to direct air towards the person augmenting the defrost and floor vents.

In 1974 the B20E/F engine switched from using the Bosch D-jetronic to the K-Jetronic mechanical fuel injection system. Also, several safety changes were introduced including a fuel tank that was located close to the transaxle to protect it in the case of a rear-end collision, and larger bumpers that protruded more from the body. The quarter-light windows in the front doors were removed as a result of the improvements in ventilation inside the car, and small anodised aluminium strips were added to the bottom of the side windows. 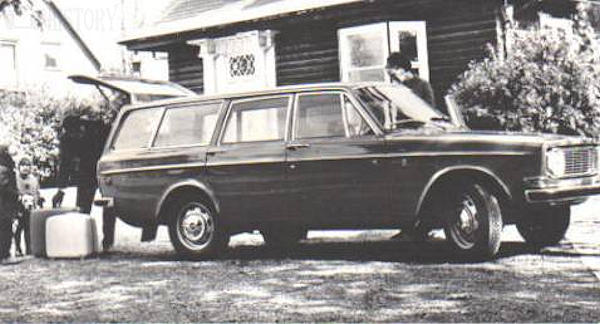 Volvo produced a high roofed version of the Volvo 145 station wagon known as an Express as a replacement for the Volvo Duett. From the windscreen back the roof was raised by approximately 2 inches (51 mm), and from the B-pillar back it was raised again by about a foot. It was available in 3 configurations: standard station wagon (full glazing, 5 seats with the option of an extra 2 rear-facing seats), fully glazed panel-van with only 2 seats, and panel van with no glass in the rear doors and rear quarter panels. It found a niche market, and several coachbuilder firms later made "Express" versions of the 245. Its rear hatch was made of glass-reinforced plastic.