Volvo ÖV 4 is the first car built by Volvo. The designation ÖV4 stands for "Öppen Vagn 4 cylindrar" in Swedish, which means Open Carriage 4 cylinders. All 10 prototypes were assembled in Stockholm at the company AB Galco, Hälsingegatan 41 where Gustav Larson worked at that time. Only one of the 10 pre-series cars manufactured during 1926 was saved for posterity and is housed in Volvo Museum, in Gothenburg, Sweden.

it was designated as ÖV 4, but became more popular under its nickname 'Jakob'. Jakob was powered by a 1944 cc air-cooled four-cylinder engine,
developing 20.7kW (28hp) with a maximum speed of 60km/h (37mph). The car had a steel-covered wooden cabriolet body. Even though the rugged chassis was designed for the rough Scandinavian roads, the open body was not exactly compatible with the Swedish climate. During the car's production life only some 205 were built. Later the company produced a closed PV 4 version. This time commercial success came quickly, and Volvo started exporting cars to
Finland, Norway, and Denmark.

The engine was designed by Gustav Larson and its main chassis components by Jan G. Smith, a designer who had worked many years in the American automobile industry and returned to Sweden in 1924. Many of Jan G. Smith's original drawings for the ÖV4 and other technical papers that he collected in America are saved in the archive of the National Museum of Science and Technology in Stockholm, Sweden.

When the first series produced ÖV4 was about to drive out of the factory and engineer Eric Carlberg put it into first gear, the car went backwards, where the car was actually in reverse gear. The explanation was that the differential gear in the rear axle had been fitted incorrectly. This mistake delayed the introduction by one day and the official introduction day for the ÖV4 was then adjusted to the April 14, 1927, the day AB Volvo officially says the automobile company Volvo was "born"— this is from a marketing point of view. The company as an automobile company was born as a subsidiary company to SKF August 10, 1926. The cabriolet was not very successful in the Swedish climate; the covered version, PV4 was introduced in the end of 1928. Between 1927 and 1929 a total of 996 cars were manufactured. 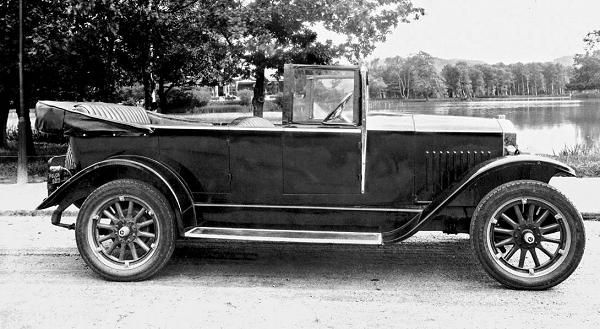