The Volvo Amazon is an executive car manufactured and marketed by Volvo Cars from 1956 to 1970 and introduced in the USA as the 122S at the New York International Auto Show in April 1959.

The Amazon shared the wheelbase of its predecessor, the PV, as well as its tall posture and high H-point seating — while offering three model configurations: two-door sedan, four-door sedan, and a five-door wagon. In 1959 Volvo became the world's first manufacturer to provide front seat belts as standard equipment on all the cars, including the export models, — later becoming the first car featuring three-point seat belts as standard equipment.

When introduced, the car was called the Amason (with an 's'), which derives from the fierce female warriors of Greek mythology, the Amazons. German motorcycle manufacturer Kreidler had already registered that name, and the two companies finally agreed that Volvo could only use the name domestically (i.e., within Sweden), modifying the spelling to Amazon. Subsequently, Volvo began its tri-digit nomenclature and the line became known as the 120 Series.

The Amazon was originally manufactured at Volvo's Lundby plant in Gothenburg and subsequently at the company's Torslandaverken plant, which began operating in 1964. By the end of production, 234,653 four-door models, 359,917 two-door models and 73,220 station wagons had been produced, of which 60% were exported; for a total of 667,791 vehicles. 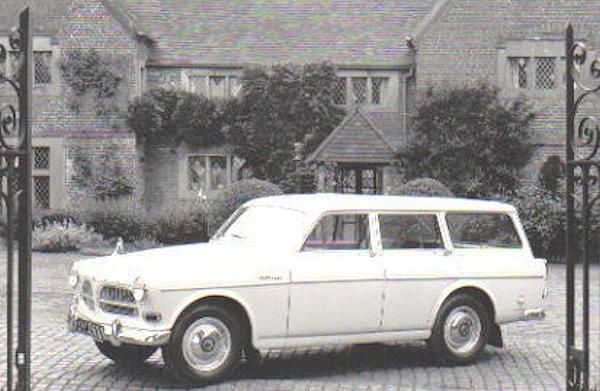 The Amazon's bodywork was constructed of phosphate-treated steel (to improve paint adhesion) and with heavy use of undercoating and anti-corrosive oil treatment.

The station wagon (estate) version was introduced at the 1962 Stockholm Auto Show, and Volvo manufactured 73,000 examples between 1962 and 1969. The Amazon estate featured a two-piece tailgate, with the lower section folding down to provide a load surface and the upper section that hinged overhead. The vehicle's rear license plate, attached to the lower tailgate, could fold "up" such that when the tailgate was lowered and the vehicle in use, the license plate was still visible. This idea was used by the original 1959 Mini. In recent years a similar arrangement was used on the tailgate of the Subaru Baja.

Under prototype designation 1200, following the PV444's internal designation as the 1100 the Amazon was released in the press in February 1956, with production initially set to begin in July of the same year, and deliveries commenced in August 1956 — under the now modified internal designation 120 series. Further iterations included the 121, the base model with a single carburetor 66 bhp (49 kW) engine, the 122S introduced in 1958 as a performance model equipped with a dual carburetor 85 bhp (63 kW) engine, and the later 130 (two-door sedan), 120 (four-door sedan) and 220 (4-door estate wagon) models. The Amazon's handbrake location, outboard of the driver's seat, was intended to accommodate subsequent bench seat models with column shift transmissions — which never materialized. Buyers began to receive the first cars in February 1957,and initial models were two-tone red and black with light gray roof, light grey with a black roof, followed by a dark blue with gray roof in 1958.

In 1966 the Volvo PV ended production, replaced by the Amazon Favorit, a less expensive version of the Amazon, without exterior chrome trim, a passenger-side sunshield or cigarette lighter, and with a three-speed rather than four-speed transmission — available in black with red interior and later white or black with red interior. The newer Volvo 140 was becoming the company's mainstream model, and the last of the four-door 120 saloons were produced in 1967. In 1967 came the 123GT, which was a Model 130 with high-compression four-cylinder B18B engine (from the Volvo P1800), M41 gearbox, fully reclining seats, front fog and driving lights (on some markets), alternator, fender mounted mirrors, special steering wheel, dash with a shelf and tachometer, and other cosmetic upgrades. In 1969 the displacement of the old B18 engine was increased and the engine was called the B20.

The last Amazon was manufactured on 3 July 1970. 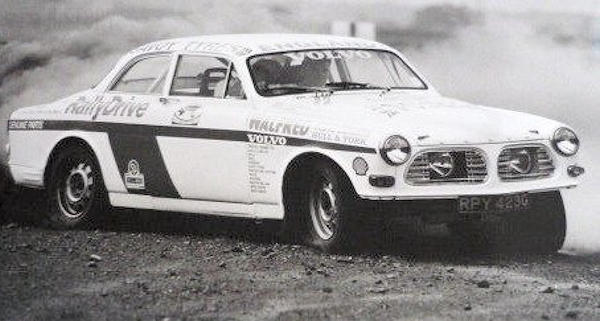 Original specifications for the Amazon included the new Volvo B16 engine, a 3-speed manual gearbox (H6) and rear-wheel drive. In 1958 the sport model, Amazon Sport, was released and later the same year the Amazon became the first series produced car with a three-point safety belt in the front seats as standard. In 1962, Volvo introduced a two-door version, a five-door wagon, and the new B18 engine, deleting two-tone paint and upholstery. In 1965 the Amazon color-coordinated embossed vinyl upholstery and door panels became available. The new gearbox selections were the three-speed M30 (briefly offered with an automatic electric clutch), the four-speed M40 and the M41 with four-speed and overdrive. The M31 gearbox was also introduced in 1961 but was only available that year (a three-speed fully synchronized gearbox with overdrive on both second and third direct gears). Gearbox options on the 121 were the M30, M31 and M40 while gearbox options on the 122S were the M40 and M41 gearboxes. In 1964 the Borg-Warner BW35 three-speed automatic transmission also became available on the four-door and two-door. From 1967 to 1968 the BW35 was also available on the five-door wagon. 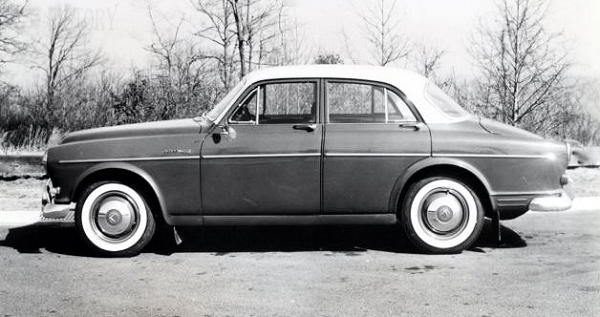