In the summer of 1995 Volvo released the S4/F4 series but had to change the model's name as it conflicted with Audi who had already reserved the "S4" name. The quickly renamed S40 saloon (sedan) and V40 (Ferrari objected to F40) estate (station wagon), manufactured at the NedCar factory in the Netherlands (a pre-Ford joint venture between Volvo and Mitsubishi Motors) and based on a common platform with the Mitsubishi Carisma. The V40, with Drag coefficient of 0.32,was the first whole model to be introduced under the direction of the British designer Peter Horbury, Volvo’s Design Director,  and was marketed in Australia, North and South America, and the Far East. The V40 was named the ‘Most Beautiful Estate Car in the World’ at an Italian award ceremony.

The Volvo S40/V40 series was a completely new car from the ground up, with no engines, with the exception of the 1.9 Turbo Diesel engine carried over from the old 400 series.

The low (2.0T) and high (1.9 T4) pressure turbo variants were positioned at the top of the motor range. The 2.0T was rounded down and badged as 1.9T and was the only engine available in North America. The 5 speed manual transmission, widely available in Europe was not certified in North American S40s, with the 5 Speed automatic as the only option. No electric CVT transmission was planned unlike the 440 HTA / High Tech Auto CVT that had been released before the 400 series was completely phased out.

In the United Kingdom, trim levels were XS, SE and CD.

Due to the common platform, many components of the suspension and drive train are compatible with Carisma as well as the Mitsubishi Lancer Evolution III, and Proton Waja.

The Volvo S40 was the first car to earn four stars in Euro-NCAP. 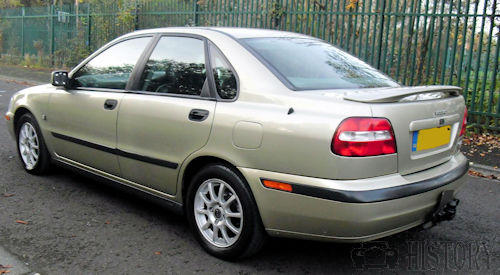