The B3 Passat was heavily facelifted in 1993 and although it was designated B4, it was not an all-new model. The facelift resulted in every external body panel being changed, except for the roof and glasshouse, with most obvious exterior change seeing the re-introduction of a grille to match the style of the other same-generation Volkswagen models of the era, such as the Mk3 Golf and Jetta. The interior was mildly updated and included safety equipment such as dual front airbags and seat belt pre-tensioners, although the basic dashboard design remain unchanged. 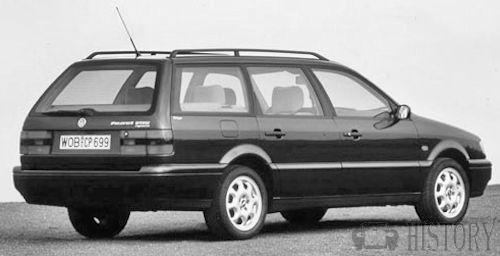 In Europe, L, CL, GL, GT and VR6 versions were available; with the VR6 with one of the trims, for example a GL VR6. Only three trim levels were available in the United States: GLS, GLX and TDI. The GLX version carried Volkswagen's 2.8 litre VR6 engine. The GLS had a 2.0 litre 8-valve engine, while the TDI had the 1.9 TurboDiesel.

Canadian versions of the Passat were similar to their European counterparts, unlike models sold in the U.S., due to a trade agreement that Canada had with Europe at the time, which allowed any car federalized in one participating country to legally be sold in any of the others. However, Canada did not get the 1.8 liter 4-cylinder petrol version, nor the 1.9 liter TurboDiesel, both of which were on sale in Europe at the time.

The only Version sold in Mexico was the 2.8 liter VR6 gasoline in GLX trim level. These versions were more expensive than the Volkswagen cars built in Mexico, due to the import tariffs, and the fact the Passat was built in Germany.