A heavily re-designed "Mark 2" variant (internally designated Typ 53B) went on sale in 1982, although it remained on the A1 platform. One unique feature of the Mark 2 was the location of the rear spoiler midway up the glass on the rear hatch. A mid-cycle update occurred in 1984, which included minor changes over the 1982 model: removal of the outlined "SCIROCCO" script from the rear hatch (below the spoiler), a redesigned air conditioning compressor, and a different brake master cylinder with in-line proportioning valves and a brake light switch mounted to the pedal instead of on the master cylinder.

Half way through the 1984 model year, a new space-saver spare wheel was added, that provided room for a larger fuel tank (with a second "transfer" fuel pump). Leather interior, power windows and mirrors, air conditioning, and a manual sunroof were options for all years. Engine power and torque steadily increased over the years. The 1984 model year saw the return of two windshield wipers (vice the large single wiper), absent since the 1976 models. 1982 and 1983 models produced 74 hp (55 kW) and 90 ft·lbf (120 N·m) of torque. The engine code was EN. The 1984 models produced 90 hp (67 kW) and 100 ft·lbf (140 N·m) torque, the engine code was JH. In mid-1986, a 16-valve model was released in the United States and Canada, which included a full body skirt, larger rear spoiler, and tear-drop shaped wheel slots to distinguish it from Mark II 8-valve models. The two engines offered were the PL code (with 123 hp (92 kW) and 120 ft·lbf (160 N·m) of torque), and the Europe-only KR code (139 hp (104 kW)), which had no emissions equipment.

Like the first generation Scirocco, the car was assembled on behalf of Volkswagen by Karmann of Osnabrück.

The Scirocco was effectively replaced by the Corrado in the VW line-up, although this had been on sale since 1989 and aimed further upmarket. 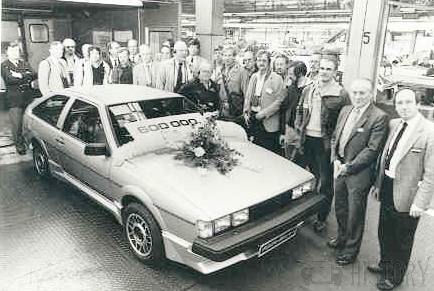