Volkswagen began work on the car during the early 1970s as the replacement for the aging Karmann Ghia coupe, and designated it the Typ 53 internally. The platform of the Golf/Rabbit and Jetta was used to underpin the new Scirocco, although almost every part of the car was re-engineered in favour of a sportier drive, and the model's all-new styling, penned by Giorgetto Giugiaro, was sleeker and sportier than that of either the Golf or Jetta. Launched six months before the Golf, in order to resolve any teething troubles before production of the high volume hatchback started, the Scirocco went on sale in Europe in 1974 and in North America in 1975. Mark I models featured a range of four-cylinder engines with displacements from 1.1 to 1.6 L (1.7 L in North America (1975 1.5L (1471), 1976–77 1.6 L, 1978 1.5 L (1457), 1979–1981 1.6 (1588 cc), 1981 1.7 (1715 cc) USA models), all featuring a single-overhead camshaft and two valves per cylinder. The 1975–1978 model year USA vehicles had 4-speed manual transmissions; for the 1979 model year, USA vehicles had 5-speed manual transmissions. Automatic transmission-equipped Sciroccos were rare

The car changed little before being replaced by the Mark 2 version in 1982 (Europe). However, air conditioning became available as an option on the domestic market in August 1975 The possibility to retrofit the installation, together with a larger battery, was offered to existing owners.

During the production of the Mark I, there were subtle changes to the body and trim. In 1977 (1976 was the first year), the conventional two wiper system changes to a single wiper which parks on the passenger side of the windscreen. In 1978, the separate front side marker and turn signal, changed to a combination wrap-around orange lens. Other mid-life changes include chrome bumpers with rubberised end caps to a plastic one-piece wrap around bumper. In 1979, the one-pieces "flag" style outside mirrors transitioned to a two-piece shrouded mirror. There were also special variants throughout the Mark I production. Most distinguishable by paint schemes and trim, there were special versions called "Sidewinder", "Sidewinder II", "Champagne Edition", "Champagne Edition II" and the "S". The Champagne Edition II only came in white with black accents. On the NA models the 1980 "S" versions came in only three colours, Alpine White, Black and Mars Red with unique colour accents. This was followed by the 1981 "S" versions which only came in Cosmos Silver Metallic, Cirrus Gray Metallic and Mars Red without the colour accents. Manually retractable sliding steel sunroofs were an available option on the "S" versions, and possibly non-"S" vehicles, too. 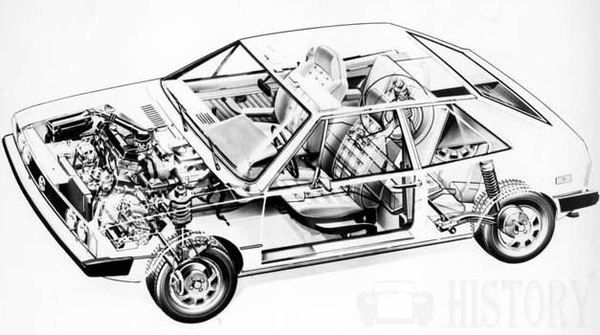