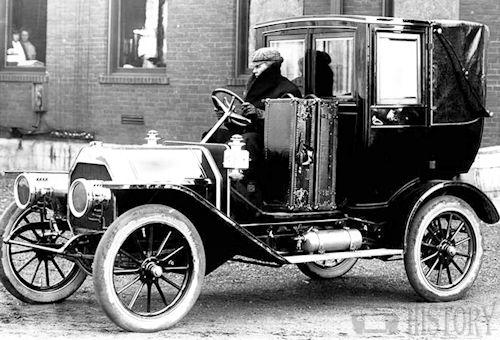 View all Taxicabs in related items Below

A taxicab, also known as a taxi or a cab, is a type of vehicle for hire with a driver, used by a single passenger or small group of passengers, often for a non-shared ride. A taxicab conveys passengers between locations of their choice. This differs from other modes of public transport where the pick-up and drop-off locations are determined by the service provider, not by the passenger, although demand responsive transport and share taxis provide a hybrid bus/taxi mode.

There are four distinct forms of taxicab, which can be identified by slightly differing terms in different countries:

Although types of vehicles and methods of regulation, hiring, dispatching, and negotiating payment differ significantly from country to country, many common characteristics exist. 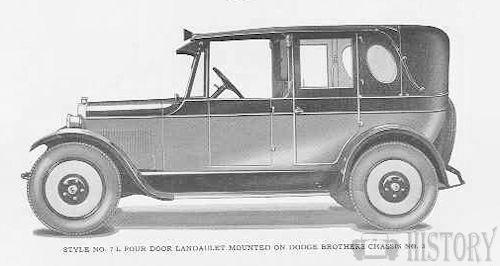 Horse-drawn for-hire hackney carriage services began operating in both Paris and London in the early 17th century. The first documented public hackney coach service for hire was in London in 1605. In 1625 carriages were made available for hire from innkeepers in London and the first taxi rank appeared on the Strand outside the Maypole Inn in 1636. In 1635 the Hackney Carriage Act was passed by Parliament to legalise horse-drawn carriages for hire. Coaches were hired out by innkeepers to merchants and visitors. A further "Ordinance for the Regulation of Hackney-Coachmen in London and the places adjacent" was approved by Parliament in 1654 and the first hackney-carriage licences were issued in 1662.

The hansom cab was designed and patented in 1834 by Joseph Hansom, an architect from York as a substantial improvement on the old hackney carriages. These two-wheel vehicles were fast, light enough to be pulled by a single horse (making the journey cheaper than travelling in a larger four-wheel coach) were agile enough to steer around horse-drawn vehicles in the notorious traffic jams of nineteenth-century London and had a low centre of gravity for safe cornering. Hansom's original design was modified by John Chapman and several others to improve its practicability, but retained Hansom's name.

These soon replaced the hackney carriage as a vehicle for hire. They quickly spread to other cities in the United Kingdom, as well as continental European cities, particularly Paris, Berlin, and St Petersburg. The cab was introduced to other British Empire cities and to the United States during the late 19th century, being most commonly used in New York.

The first cab service in Toronto, "The City", was established in 1837 by Thornton Blackburn, an ex-slave whose escape when captured in Detroit was the impetus for the Blackburn Riot. 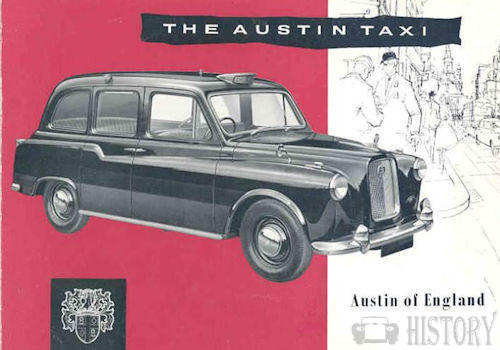 Electric battery-powered taxis became available at the end of the 19th century. In London, Walter C. Bersey designed a fleet of such cabs and introduced them to the streets of London on 19 August 1897.  They were soon nicknamed 'Hummingbirds’ due to the idiosyncratic humming noise they made. In the same year in New York City, the Samuel's Electric Carriage and Wagon Company began running 12 electric hansom cabs. The company ran until 1898 with up to 62 cabs operating until it was reformed by its financiers to form the Electric Vehicle Company.

The modern taximeter was invented and perfected by a trio of German inventors; Wilhelm Friedrich Nedler, Ferdinand Dencker and Friedrich Wilhelm Gustav Bruhn.The Daimler Victoria—the world's first gasoline-powered taximeter-cab—was built by Gottlieb Daimler in 1897 and began operating in Stuttgart in 1897. Gasoline-powered taxicabs began operating in Paris in 1899, in London in 1903, and in New York in 1907. The New York taxicabs were imported from France by Harry N. Allen who decided to paint his taxicabs yellow to maximise his vehicles' visibility.

Taxicabs proliferated around the world in the early 20th century. The first major innovation after the invention of the taximeter occurred in the late 1940s, when two-way radios first appeared in taxicabs. Radios enabled taxicabs and dispatch offices to communicate and serve customers more efficiently than previous methods, such as using callboxes. The next major innovation occurred in the 1980s, when computer assisted dispatching was first introduced.

As military and emergency transport

Paris taxis played a memorable part in the French victory at First Battle of the Marne in the First World War. On September 7, 1914, the Military Governor of Paris,Joseph Gallieni, gathered about six hundred taxicabs at Les Invalides in central Paris to carry soldiers to the front at Nanteuil-le Haudoin, fifty kilometers away. Within twenty-four hours about six thousand soldiers and officers were moved to the front. Each taxi carried five soldiers, four in the back and one next to the driver. Only the back lights of the taxis were lit; the drivers were instructed to follow the lights of the taxi ahead. The Germans were surprised, and were pushed back by the French and British armies. Most of the taxis were demobilized on September 8 but some remained longer to carry the wounded and refugees. The taxis, following city regulations, dutifully ran their meters. The French treasury reimbursed the total fare of 70,012 francs. The military impact of the soldiers moved by taxi was small in the huge scale of the Battle of the Marne, but the effect on French morale was enormous; it became the symbol of the solidarity between the French army and citizens. It was also the first recorded large-scale use of motorized infantry in battle.

The Birmingham pub bombings on 21 November 1974, which killed 21 people and injured 182, presented emergency services with unprecedented peace time demands. According to eye witness accounts, the fire officer in charge, knowing the 40 ambulances he requested were unlikely to be available, requested the Taxi Owners Association to transport the injured to the nearby Birmingham Accident Hospital and Birmingham General Hospital.

Taxi services are typically provided by automobiles, but in other countries various human-powered vehicles, (such as the rickshaw or pedicab) and animal-powered vehicles (such as the Hansom cab) or even boats (such as water taxies or gondolas) are also used or have been used historically. In Western Europe, Bissau, and to an extent, Australia, it is not uncommon for expensive cars such as Mercedes-Benz to be the taxicab of choice. Often this decision is based upon the perceived reliability of, and warranty offered with these vehicles. These taxi-service vehicles are almost always equipped with four-cylinderturbodiesel engines and relatively low levels of equipment, and are not considered luxury cars. This has changed though in countries, such as Denmark, where tax regulation make it profitable to sell the vehicles after a few years of service, which requires the cars to be well equipped and kept in good condition. 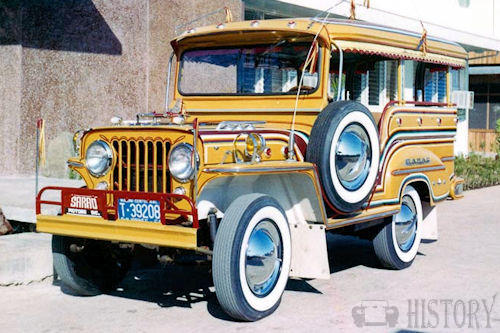 Wheelchair taxicabs are most often specially modified vans or minivans. Wheelchair-using passengers are loaded, with the help of the driver, via a lift or, more commonly, a ramp, at the rear of the vehicle. This feature is however a subject for concern amongst Licensing Authorities who feel that the wheelchair passenger could not easily exit the vehicle in the event of accident damage to the rear door. The latest generation of accessible taxis features side loading with emergency egress possible from either of the 2 side doors as well as the rear. The wheelchair is secured using various systems, commonly including some type of belt and clip combination, or wheel locks. Some wheelchair taxicabs are capable of transporting only one wheelchair-using passenger at a time, and can usually accommodate 4 to 6 additional able-bodied passengers.

Wheelchair taxicabs are part of the regular fleet in most cases, and so are not reserved exclusively for the use of wheelchair users. They are often used by able-bodied people who need to transport luggage, small items of furniture, animals, and other items. Because of this, and since only a small percentage of the average fleet is modified, wheelchair users must often wait for significantly longer periods when calling for a cab, and flagging a modified taxicab on the street is much more difficult.

These particular taxicabs have developed their own special names such as, 'Maxicabs'.

Taxicabs in less developed places can be a completely different experience, such as the antique French cars typically found in Cairo. However, starting March 2006, newer modern taxicabs entered the service operated by various private companies. Taxicabs differ in other ways as well: London's black cabs have a large compartment beside the driver for storing bags, while many fleets of regular taxis also include wheelchair accessible taxicabs among their numbers (see below). Although taxicabs have traditionally been sedans, minivans, hatchbacks and even SUV taxicabs are becoming increasingly common. In many cities, limousines operate as well, usually in competition with taxicabs and at higher fares.

Recently, with growing concern for the environment, there have been solar powered taxicabs. On April 20, 2008, a "solar taxi tour" was launched that aimed to tour 15 countries in 18 months in a solar taxi that can reach speeds of 90 km/h with zero emission. The aim of the tour was to spread knowledge about environmental protection.

In Australia, nearly all taxis run on LPG, as well as the growing fleet of hybrids. Argentina and the main cities of Brazil have large fleets of taxis running onnatural gas. Many Brazilian taxis are flexible-fuel vehicles running on sugarcane ethanol, and some are equipped to run on either natural gas or as a flex-fuel. At least two Brazilian car markers sell these type of bi-fuel vehicles.

Malaysia and Singapore has many of its taxicabs running on compressed natural gas (CNG).

San Francisco became in 2005 one of the first cities to introduce hybrids for taxi service, with a fleet of 15 Ford Escape Hybrids, and by 2009 the original Escape Hybrids were retired after 300,000 miles per vehicle. In 2007 the city approved the Clean Air Taxi Grant Program in order to encourage cab companies to purchase alternative fuel vehicles, by providing incentives of USD2,000 per new alternative fuel vehicle on a first-come, first-served basis. Out of a total of 1,378 eligible vehicles (wheelchair-accessible taxi-vans are excluded) 788 are alternative fuel vehicles, representing 57% of the San Francisco's taxicab fleet by March 2010. Gasoline-electric hybrids accounted for 657 green taxis and compressed natural gas vehicles for 131.

As of mid-2009 New York City had 2,019 hybrid taxis and 12 clean diesel vehicles, representing 15% of New York's 13,237 taxis in service, the most in any city in North America. At this time owners began retiring its original hybrid fleet after 300,000 and 350,000 miles per vehicle. Two attempts by the Bloomberg Administration to implement policies to force the replacement of all New York's 13,000 taxis for hybrids by 2012 have been blocked by court rulings.

Chicago is following New York City's lead by proposing a mandate for Chicago's entire fleet of 6,700 taxicabs to become hybrid by 1 January 2014. As of 2008 Chicago's fleet had only 50 hybrid taxicabs. In 2008 Boston mandated that its entire taxi fleet must be converted to hybrids by 2015. Arlington, Virginia also has a small fleet of 85 environmentally friendly hybrid cabs introduced in early 2008. The green taxi expansion is part of a county campaign known as Fresh AIRE, or Arlington Initiative to Reduce Emissions, and included a new all-hybrid taxi company called EnviroCAB, which became the first all-hybrid taxicab fleet in the United States, and the first carbon-negative taxicab company in the world A similar all-hybrid taxicab company, Clean Air Cab, was launched in Phoenix, Arizona in October 2009.

Hybrid taxis are becoming more and more common in Canada, with all new taxis in British Columbia being hybrids, or other fuel efficient vehicles, such as the Toyota Prius or Toyota Corolla. Hybrids such as the Ford Escape Hybrid are slowly being added to the taxicab fleet in Mexico City.

Other cities where taxi service is available with hybrid vehicles include Tokyo, London, Sydney, Rome and Singapore. Seoul introduced the first LPI hybrid taxi in December 2009. The internal combustion engine runs on liquefied petroleum gas (LPG) as a fuel.

In 2010 Beijing, China introduced electric taxis. A trial run began in March, 2010 with taxis being cheaper than their regular gasoline counterparts.