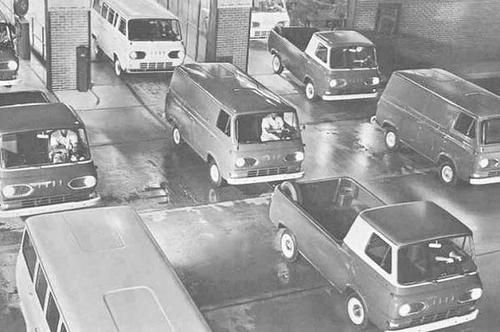 View all Vans in related items Below.

A van is a kind of vehicle used for transporting goods or people. Depending on the type of van it can be bigger or smaller than a truck and SUV, and bigger than an automobile. There is some varying in the scope of the word across the different English-speaking countries.

Larger vans with only front seats are often used for business purposes, to carry goods and equipment. Specially-equipped vans are used by television stations as mobile studios. Postal services and courier companies use large step vans to deliver packages.

Van meaning a type of vehicle arose as a contraction of the word caravan. The early records of van as a vehicle in English are in the mid 19th century meaning a covered wagon for transporting goods (earliest reported record 1829). Caravan with the same meaning has records since the 1670s. A caravan, meaning one wagon, had arisen as an extension or corruption of caravan meaning a convoy of multiple wagons.

In Australian English, the term van is commonly used to describe a minivan, a passenger minibus, or an Australian panel van as manufactured by companies such as Holden and Ford at various times.

A full-size van used for commercial purposes is also known as a van; however, a passenger vehicle with more than 7 or 8 seats is more likely to be called a minibus.

Finally, the term van can sometimes be used interchangeably with caravan, which in the U.S. is referred to as a travel trailer.

The British term people mover is also used in Australian English to describe a passenger van. The American usage of van to mean a cargo box trailer or semi-trailer is used rarely, if ever, in Australia.

In India, van is one of the most common modes of transport and is often used for commuting school children to and from schools as parents, especially working parents are too busy to themselves pick their children from school and when school buses are full and unable to accommodate other children.

Early Japanese vans include the Mazda Bongo and the Subaru 360 van. The Japanese also produced many vans based on the American flat nose model, but also mini-vans which for the American market have generally evolved to the long-wheelbase front wheel drive form factor pioneered by the Nissan Prairie and Mitsubishi Chariot. Microvans, vans that fulfill kei car regulations, are very popular for small business. The term is also used to describe full-fledged station wagons (passenger car front sheetmetal, flat folding back seats, windows all around) and even hatchbacks with a basic trim package intended for commercial use. These are sometimes referred to as "Light Vans" (Japanese: ライトバン). 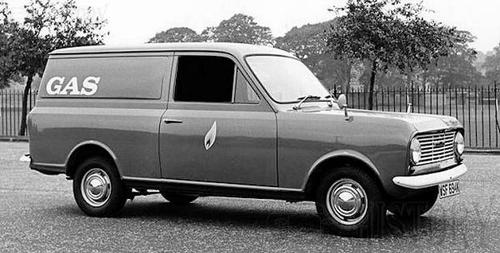 In British English, the word van refers to vehicles that carry goods only, on both roads and rails. What would be called a minivan in American English is called a people-carrier or MPV, or multi-purpose vehicle, and larger passenger vehicles are called a minibus. The Telegraph newspaper introduced the idea of "White Van Man", a typical working class man or small business owner who would have a white Ford Transit, Mercedes Sprinter, or similar panel van. Today the phrase "man and van" refers to light removal firms normally operated by a sole business owner transporting anything from the contents of a whole house to just a few boxes. The word "van" also refers to railway covered goods wagons, called "boxcars" in the United States.

In the United States, a van can also refer to a box-shaped trailer or semi-trailer used to carry goods. In this case there is a differentiation between a "dry van", used to carry most goods, and arefrigerated van, or reefer, used for cold goods. A railway car used to carry baggage is also called a van.

A vehicle referred to as a full-size van is usually a large, boxy vehicle that has a platform and powertrain similar to their light truck counterparts. These vans may be sold with the space behind the front seats empty for transporting of goods (cargo van), or furnished for passenger use by either the manufacturer (wagon) or another company for more personal comforts, such as entertainment systems (conversion van). Full-size vans often have a very short hood (bonnet), with the engine block moved to within the passenger cabin.

A cutaway van chassis is a variation of the full size van which was developed for use by many second stage manufacturers. Such a unit generally has a van front end, and driver controls in a cab body which extends only to a point aft of the driver and passenger seats, where the rest of the van body is cutoff (leading to the terminology "cutaway"). From that point aft, usually only the chassis frame rails and running gear extend to the rear when the unit is shipped as an "incomplete vehicle". A second stage manufacturer, commonly known as a bodybuilder, will complete the vehicle for uses such as recreational vehicles, small school buses, minibuses, type III ambulances, and delivery trucks. A large portion of cutaway van chassis are equipped with dual rear wheels. Some second stage manufacturers also add a third weight-bearing single wheel "tag axle" for larger minibus models.

The term van may also refer to a minivan. However, minivans are usually distinguished by their smaller size and traditionally front wheel drive powertrain, although many now are being equipped withfour wheel drive. Minivans typically offer seven or eight passenger seating capacity (similar to the smallest full-sized vans), and better fuel economy than full-sized vans, at the expense of power, cargo space, and towing capacity. In addition, many new minivans have dual side sliding doors. 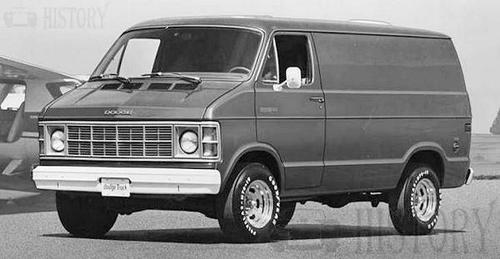 The precursor to American Vans would be the Sedan deliveries of the 1930s to late-1950s. The first generation of American vans were the 1960s compact vans, which were patterned in size after theVolkswagen Bus. The Corvair-based entry even imitated the rear-mounted, air-cooled engine design. The Ford Falcon had a flat nose, with the engine mounted between and behind the front seats. The Dodge A100 had a similar layout and could accommodate a V8 engine. Chevrolet also switched to this layout. The Ford, Dodge and Corvair vans were also produced as pickup trucks.

The standard or full size vans appeared with Ford's innovation of moving the engine forward under a short hood and using pickup truck components and taillights. The engine cockpit housing is often called a dog house. Over time, they evolved longer noses and sleeker shapes. The Dodge Sportsman was available with an extension to the rear of its long wheelbase model to create a 15 passenger van. Vehicles have been sold as both cargo and passenger models to the general public, as well as in cutaway van chassis versions for second stage manufacturers to make box vans, ambulances, campers, and other vehicles. Second stage manufacturers also modify the original manufacturer's body to create custom vans for the general public.

In the 1970s, songs like "Chevy Van", written and performed by Sammy Johns, and nicknames like "sin bin" or "screw canoe" became part of the culture as owners transformed them into rolling bedrooms and lounges. Conversion vans became a large market with plusher accommodations than factory seats.

Dodge ended production of their full-size vans in June 2002 (as 2003 models), and replaced it with the German originated Dodge Sprinter, which is based on a narrower, more fuel-efficient European design pattern with a 150 hp (110 kW) diesel turbo I5. Typical versions of the Sprinter are taller than other unmodified vans (tall enough to stand in), with a more slanted (aerodynamic) profile in front. They have been adopted primarily for delivery and lightweight Class-C van cab motor home applications.

Another type of van, peculiar to North America, is the step van, so-called because of the ease with which one can step in and out of it. Widely used by delivery services, courier companies and the parcel division of the US Postal Service and Canada Post, they are often seen driven with the door open, especially in big cities. Step vans have more boxy shapes and higher rooftops than other vans, and are rarely employed for carrying passengers.