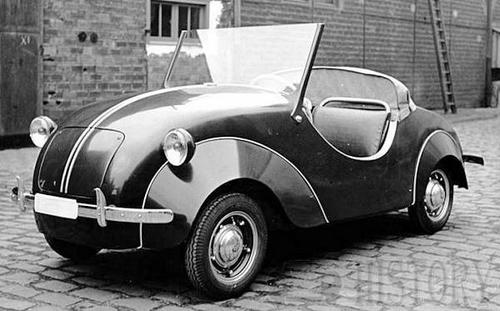 View all microcar and bubble cars,also cyclecars in related items Below.

A microcar is the smallest automobile classification, usually applied to very small cars (smaller than city cars). Such small cars were generally referred to as cyclecars until the 1940s. More recent models are also called bubble cars due to their bubble-shaped appearance.

The definition of a microcar has varied considerably in different countries. Since there are usually tax and/or licensing advantages to the classification, multiple restrictions are often imposed, starting with engine size. The Register of Unusual Microcars in the UK says: "economy vehicles with either three or four wheels, powered by petrol engines of no more than 700cc or battery electric propulsion, and manufactured since 1945". The Bruce Weiner Microcar Museum (the world's largest collection of Microcars) says "Engine sizes of 700cc and less and 2 doors or less" and the US-based Vintage Microcar Club simply defines it as 1000 cc or less.

Typical microcars usually have some of the following features:

Many, but not all, microcars are also:

There are also a variety of microcar trucks, usually of the "forward control" or van style to provide more cargo room. These might be used for local deliveries on narrow streets where standard small pickup trucks would be inconvenient, and full-sized delivery trucks would be impossible.

A motorised quadricycle is a four-wheeled vehicle that can be registered as a motorcycle. They are analogous to mopeds or light motorcycles rather than cars. Consequently, they can be driven by underage drivers (14-18-year-olds) or in some cases even without a license, and they are free of car taxes. Their speed is usually limited to ca. 45 km/h either through a speed or power limit. 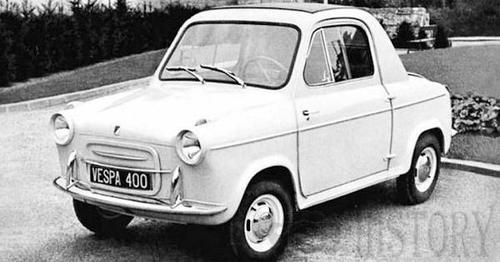 The economy of operating such a small car (mostly in fuel and tires) has also often been helped by three-wheeled microcars or cars with very small engines being treated as motorcycles for tax andinsurance purposes.

In some countries, drivers of microcars (defined for example as having a certain maximum weight) are exempt from licensing conditions. The microcars may have a special category or may be considered motorcycles and therefore no car driving licence is needed (Austria, Belgium and France (where they are known as VSPs, or Voiture Sans Permis), Germany, Spain, Italy). This assures a certain market among older people who do not want to stand for, or who cannot pass an auto driver's licence test, or younger people who are not yet old enough to qualify. More negatively, at least in Austria, Belgium and France, such cars are sometimes derided as a solution for people who have had their licence revoked because of drunk driving.

In some European countries, taxes formerly depended on engine displacement, and/or insurance rates depended on power. This has given rise to names of such cars as Citroën 2CV and Renault 4CV. This favourable treatment by governments is based on the benefits to a society of reducing use of such resources as minerals, parking space and foreign exchange, reduced noise and chemical pollution, reduced hazard to others (they are slow vehicles) etc. Reduced global warming from carbon dioxide emission has now been added to this list.

In the UK before October 2000, a person who passed a motorcycle test was automatically granted a full sub-category B1 licence (lightweight car with an unladen weight of 550 kg or less, motor quadricycle, motor tricycle) as an additional entitlement with the full Category A (motorcycle) licence. Since 2000 a provisional car licence has to be requested.

Another advantage is the ease of parking. Some microcars can be parked perpendicular, where other cars park parallel, or lifted by hand, like a motor scooter, to get into a tight spot. The Isetta and some others had forward entry, to facilitate perpendicular parking close to other vehicles. The Myers Motors NmG (originally called the Corbin Sparrow) is licensed as a motorcycle and parked in motorcycle spaces in California, and probably in other places.

The small size improves handling by reducing the angular inertia. The Messerschmitt and Spatz have been described as much better than ordinary cars on snow and ice. Spare room on the road and ease of missing obstacles are also improved.

For the performance oriented, who prefer more than two wheels and a roof, the scaling laws (elaborated in There's Plenty of Room at the Bottom) show that one need not give up acceleration until the curb weight comes down to around the driver's weight, because power per weight of the car itself improves with small size, in an otherwise similar design. Top speed is lost with small scale, due to the decreased Reynolds number, but this is a small effect. The Messerschmitt TG500 had about a 78 mph (126 km/h) top speed with 15 kW (20 horsepower) and excellent aerodynamics. 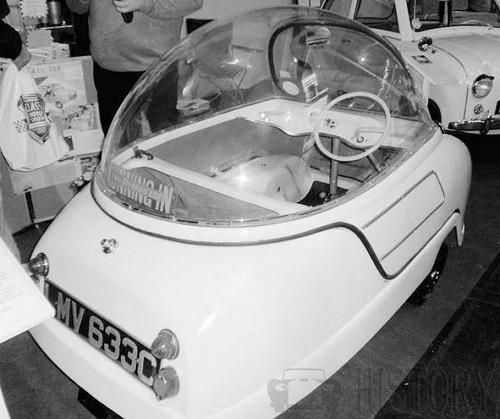 Bubble car is a subjective term used for some small, economical microcars, usually produced in the 1950s and 1960s.

The Messerschmitt KR175 and KR200, and the FMR Tg500, had aircraft-style bubble canopies, giving rise to the term bubble car to refer to all these post-war microcars. Isettas and others also had a bubble-like appearance.

Bubble cars became popular in Europe at that time as a demand for cheap personal motorised transport emerged and fuel prices were high due in part to the 1956 Suez Crisis. Most of them were three-wheelers, which in many places qualified them for inexpensive taxes and licensing as motorcycles.

Most bubble cars were manufactured in Germany, including by the former German military aircraft manufacturers, Messerschmitt and Heinkel. Automobile and motorcycle manufacturer BMW manufactured the Italian Iso Rivolta Isetta under licence, using an engine from one of their own motorcycles. France also produced large numbers of similar tiny vehicles called voiturettes, but unlike the German makes, these were rarely sold abroad.

The United Kingdom had licence-built right-hand drive versions of the Heinkel Kabine and the Isetta. The British version of the Isetta was built with only one rear wheel instead of the narrow-tracked pair of wheels in the normal Isetta design in order to take advantage of the three-wheel vehicle laws in the United Kingdom. There were also indigenous British three-wheeled microcars, including theTrident from the Peel Engineering Company on the Isle of Man.

The introduction of the Austin Mini in 1959 is often credited with bringing about the demise of the bubble car. The Mini provided four adult seats and more practical long distance transport often at a lower cost. 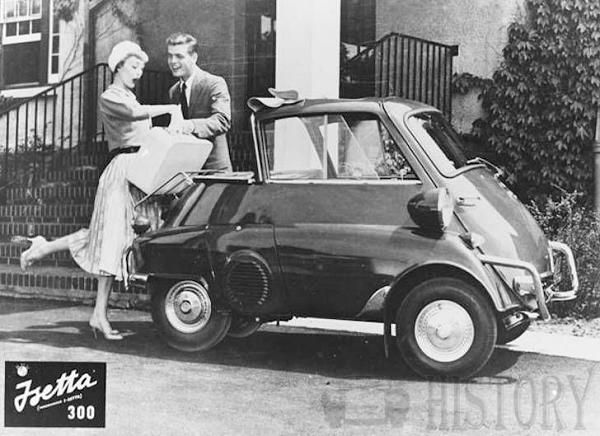