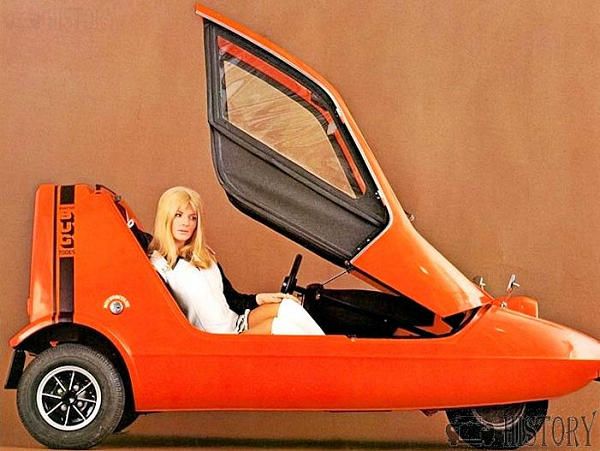 View all in related items Below.

A three-wheeler is a vehicle with three wheels. Some are motorized tricycles, which may be legally classed as either automobiles or motorcycles,

Three-wheeled automobiles can have either one wheel at the back and two at the front, (for example: Morgan Motor Company) or one wheel at the front and two at the back (such as the Reliant Robin). Due to better safety when braking, an increasingly popular form is the front-steering "tadpole" or "reverse trike" sometimes with front drive but usually with rear drive. A variant on the 'one at the front' layout was the Scott Sociable, which resembled a four-wheeler with a front wheel missing.

Three-wheeler cars, including some cyclecars, bubble cars and microcars, are built for economic reasons: in the UK for tax advantages, or in the US to take advantage of lower safety regulations, being classed as motorcycles. As a result of their light construction and potential better streamlining, three-wheeled cars are usually less expensive to operate.

Three-wheeler transport vehicles known as auto rickshaws are a common means of public transportation in many countries in the world, and are an essential form of urban transport in many developing countries such as India and the Philippines.

Auto rickshaws are a form of novelty transport in many Eastern countries.

Early car pioneer Karl Benz developed a number of three-wheeled models. One of these, the Benz Patent Motorwagen, is regarded as the first purpose-built automobile. It was made in 1885.

In 1896, John Henry Knight showed a tri-car at The Great Exhibition.

In 1897, Edward Butler (inventor) made the Butler Petrol Cycle, another three-wheeled car.

A Conti 6 hp Tri-car competed in (but did not complete) a 1907 Peking-to-Paris race sponsored by a French newspaper, Le Matin

A configuration of two wheels in the front and one wheel at the back presents two advantages: it has improved aerodynamics, and that it readily enables small lightweight motorcycle powerplant and rear wheel to be used. This approach was used by the Messerschmitt KR200 and BMW Isetta. Alternatively, a more conventional front-engine, front wheel drive layout as is common in four-wheeled cars can be used, with subsequent advantages for transversal stability (further front location of CG) and traction (two driven wheels instead of one).

With two wheels in the front (the "tadpole" form or "reverse trike") the vehicle is far more stable in braking turns, but remains more prone to overturning in normal turns compared to an equivalent four-wheeled vehicle, unless the center of mass is lower and/or further forward. Motorcycle-derived designs suffer from most of the weight being towards the rear of the vehicle.

For lower wind resistance (which increases fuel efficiency), a teardrop shape is often used. A teardrop is wide and round at the front, tapering at the back. The three-wheel configuration allows the two front wheels to create the wide round surface of the vehicle. The single rear wheel allows the vehicle to taper at the back. Examples include the Aptera 2 Series and Myers Motors NmG.

Having one wheel in front and two in the rear for power reduces the cost of the steering mechanism, but greatly decreases lateral stability when cornering while braking.

When the single wheel is in the front (the "delta" form, as in a child's pedal tricycle), the vehicle is inherently unstable in a braking turn, as the combined tipping forces at the center of gravity from turning and braking can rapidly extend beyond the triangle formed by the contact patches of the wheels. This type, if not tipped, also has a greater tendency to spin out ("swap ends") when handled roughly.

The disadvantage of a three-wheel configuration is lateral instability - the car will tip over in a turn before it will slide. This can be prevented in 3 different ways:

In the case of a three wheeled ATV, tipping can be avoided by the rider leaning into turns.

To improve stability some three-wheelers are designed as tilting three-wheelers so that they lean while cornering like a motorcyclist would do. The tilt may be controlled manually, mechanically or by computer.

A tilting three-wheeler's body and or wheels tilt in the direction of the turn. Such vehicles can corner safely even with a narrow track.

Several configurations are practical. Two front wheels and one rear, where all three wheels tilt, use the acronym 2F3T (i.e. two front three tilt). Other variations 1F1T,where only the front wheel tilts, an example being the Vandenbrink Carver, made in the Netherlands.

Tilting can be actively controlled by applying force between the paired wheels. A "free leaner" is balanced by steering, like a single track vehicle. This still leaves some advantages in traction, and the tilt can be locked for parking faster than a stand can be deployed.

Propulsion may be on one, two, or three wheels, tilted or not. Many possible arrangements require particularly flexible U-joints, which favours the other possibilities. 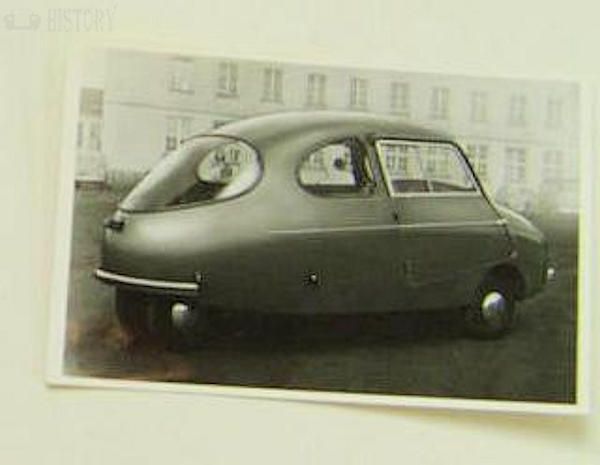