When the UK branch of the global GM introduced the Vauxhall Astra, it was accompanied by a fanfare of publicity hailing it as the aerodynamic speedster to kill the Golf GTI That it never succeeded in it's 1.8 SOHC form was partly due to mixed feelings towards it's new 'aero' clothing and partly because no-one was ever able to get it to perform as well as Vauxhall promised it would.

After about 18 months, the GTE was withdrawn from sale pending a rethink. It reappeared in 2 litre form with an 8-valve 124bhp engine and a 16V version, endowing the car with more bhp than just about any other in this class. Known as Vauxhall's twin-camshaft C20XE  the "red top" later cars emissions regulations reduced power slightly with catalytic converter fitted as fitted as standard.Due to front wheel drive torquesteer it became a handfull for some drivers not used to the power.

The bodyshell remains unaltered, albeit at first only available in three-door form, and the dubious rearward vision and digital instruments are still hallmarks of the GTE package from that time. The 16V engine,with electronic fuel injection though, provides lusty performance (up to 135mph) and remains wonderfully smooth right though to the red-line which GM claimef was safe to 10,000rpm! Limited editons also came with leather trim and recaro seats 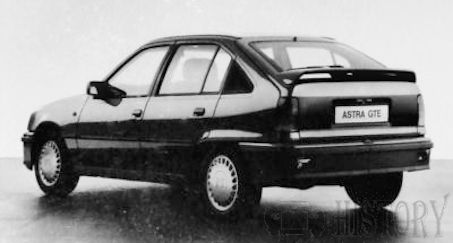