The Vanden Plas Princess designates a compact luxury car of the British Motor Corporation (BMC), which was sold under different brand names and type designations. For a time in the 1960s, the ADO16 was the best-selling passenger car in Britain .

This series were manufactured in Great Britain. The car was introduced on August 15, 1962 as the Morris 1100 . The range was then extended to the Vanden Plas Princess 1100 from October 1962.The Introduction of the Vanden Plas 1100 . It is the top-of-the-line model with walnut veneer dashboard and door panels, rear picnic tables and front seats in Conolly leather, Wilton carpeting and West of England cloth headlining.Options such as sliding roof and heated rear window also a twin speaker radio. 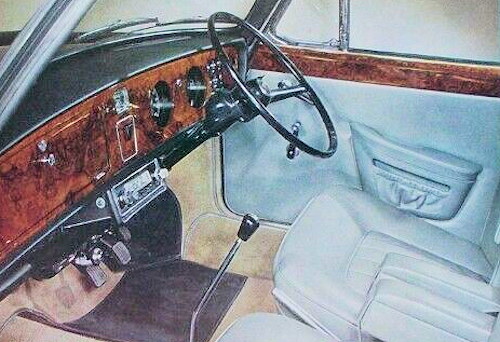 The ADO16 was designed by Alec Issigonis . Pininfarina , the Italian designer who previously designed the Austin A40 Farina for BMC , designed the body. After the successful but unprofitable Mini , BMC needed a larger lower mid-range car. The ADO16 essentially has the drive technology of the Mini: the transversely installed BMC-A motor, which drives the front wheels via a transmission located in the oil sump . Also the chassis with double wishbones at the front and parallel swingarmsrear is similar, but the ADO16 got disc brakes with floating calipers.

It was the first car to receive the Hydrolastic suspension devised by Alex Moulton - a hydraulic coupling of the front and rear wheel suspension on each side of the car, with all the arms of the wheel suspension being mounted in rubber.  The wheels on one side were mechanically connected and shared a spring unit. As a result, body roll was less than what the very soft suspension would suggest, but at the expense of a greater tendency to pitch. With the Hydrolastic system, in which the spring elements on the same side of the vehicle are connected to each other with hose lines, pitching is greatly reduced by damping valves in the connecting line.

The original Mark I models (1962–1967) can be recognized by the almost vertical tail fins with the small rear light units. Promotional brochures highlighted the spacious interior compared to 1964 UK competitorsThe under-engine gearbox, which also shared the oil supply with the engine, featured four forward gears, the top three of which were synchronized. From November 1965 there was a four-speed automatic from Automotive Products (AP).

In late May 1967, BMC announced that they would equip the , Vanden Plas with the larger 1,275 cc engine. The 1275 cc engine is available as an option in the Vanden Plas in a 58 bhp (43 kW) version with a carburettor. These models will receive a special "1275cc" sign. June 1968 Vanden Plas  would be fitted with the more powerful twin carburettor version of the 1275cc engine. The automatic versions retain the single-carburetor engine  .The Mark II versions of the Vanden Plas appeared in October 1968  Launch of the 1100 Mark II  Vanden Plas are still only available with four doors and are also available with an optional automatic transmission. BMC combined the engine already known from the Mini Cooper and Austin-Healey Sprite with the transmission of the 1100, whereby the transmission ratios of the individual gears remained unchanged despite the different engine, but the axle ratio increased from 4.133 to 3.65, later also 3, 44 was enlarged .From the outside, the Mark II is recognizable by a slightly wider grille that extends below the headlights and is a bit more textured. These models have changed taillights, which were also installed in the Austin FX4 taxi model in this form . They continued to be fitted with four-speed gearboxes throughout, the top three gears of which were synchronized; fully synchronized transmissions were introduced in 1968. the mark 2 was built untill 1971. 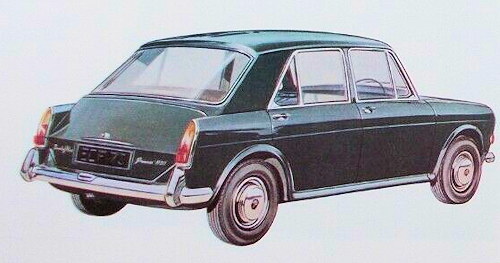