The coachbuilder's name first appeared in the United Kingdom in 1906 when Métallurgique cars were imported with Vanden Plas coachwork. The first Vanden Plas company in England was established by Warwick Wright (now Peugeot dealers) in 1913, building bodies under license from Vanden Plas Belgium.

During World War I UK activities were switched to aircraft production and the UK business was bought by Aircraft Manufacturing Company who were based at Hendon near London. In 1917 a company, Vanden Plas (1917) Ltd., was incorporated. After the war it seems to have been a struggle to get back into coachbuilding and in 1922 that company was placed in receivership.

The exclusive UK naming rights seem to have been lost as in the early 1920s the Belgian firm was exhibiting at the London Motor Show alongside the British business. In 1923 the rights to the name and the goodwill were purchased by the Fox brothers who incorporated Vanden Plas (England) 1923 Limited. They moved the business from Hendon to Kingsbury and built on the contacts that had been made with Bentley. Between 1924 and 1931, when Bentley failed, Vanden Plas built the bodies for over 700 of their chassis.

In the 1930s the company became less dependent on one car maker and supplied coachwork to such as Alvis, Armstrong Siddeley, Bentley, Daimler, Lagonda and Rolls-Royce. The company also updated its production methods and took to making small batches of similar bodies. With the outbreak of war in 1939 the company returned to aircraft work, and coachbuilding stopped. During the War the company manufactured the wooden framework for the De Havilland Mosquito, one of the most successful aircraft of WWII. After the war the company continued its association with De Havilland and manufactured parts for the DH Vampire jet fighter.

With peace in 1945 the company looked to restart its old business when a new customer came along. Austin wanted to market a chauffeur-driven version of its in-house-built large 4-litre Rolls-Royce-size A110 Sheerline luxury car and approached Vanden Plas. Vanden Plas became a subsidiary of the Austin Motor Company in 1946 and produced Austin's A120 Princess model on the Austin Sheerline chassis.

From 1958 this also began to involve chassis assembly and the Austin (now BMC) board recognised Vanden Plas as a motor manufacturer in its own right dropping Austin from the name so the Princess could be sold by Nuffield dealers. In 1960 the Princess became the Vanden Plas Princess.

Austin was joined in BMC by Jaguar with its new subsidiary Daimler. Production of Princess limousines ended in 1968 when they were replaced with Daimler DS420 limousines (Jaguar had acquired Daimler in 1960) built by Vanden Plas on a lengthened Jaguar Mark X platform. The DS420 was produced at the Kingsbury Lane Vanden Plas factory until it closed in November 1979.

The British Leyland overall holding company board decided in 1967 there were insufficient funds in the group advertising budget to cope with marketing in North America the Daimler brand as well as Jaguar. This decision was later changed but Vanden Plas is used in North America instead of Daimler on Jaguar's top luxury models. Ownership of the Vanden Plas name stayed with the Rover Group so when Rover was sold Jaguar was obliged to stop using Vanden Plas in the United Kingdom though it continues to do so in America. Within the UK a Daimler Double-Six Vanden Plas became a plain Daimler Double-Six.

Also in 1957/8, Vanden Plas were asked by Leonard Lord to add luxury fittings to a batch of Austin A105 Westminster cars, beginning the practice of using the company's skills and name for badge-engineered (and genuinely improved) luxury versions of many of the BMC (and later British Leyland (BL)) cars such as the 1100/1300 range and the Allegro (known as the Vanden Plas 1500, 1.5 & 1.7 ).

From 1985 to 1989, Austin Rover made upmarket Vanden Plas models within its Metro, Maestro, Montego and Rover SD1 ranges.

The name is also used in North America on Jaguar cars otherwise branded Daimler in other markets. 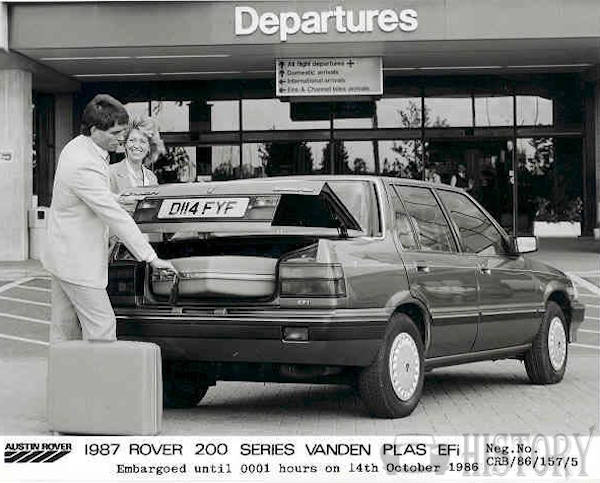