Commercial vehicle manufacturer of Detroit, Michigan;USA From 1927 to 1953. 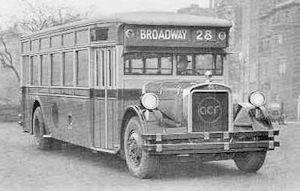 ACF (American Car & Foundry Co) was a commercial vehicle manufacturer from the late 190s to the 1940s as ACF.

In 1925 the Fageol Motors Co, Kent, Ohio, and J G Brill Co, Philadelphia, Pennsylvania, were taken over by the American Car & Foundry Co, Detroit, Michigan they were at the time the largest constructor of railroad rolling stock in America,to integrated bus manufacturing into there business.

Fageol production was transferred to Detroit in 1926 but the following year powerful new ACF models replaced them and the Fageol Bros left to set up the Twin Coach Co, in Kent, Ohio, some models still carried the Fageol name in 1929.

In 1928 the ACF Metropolitan' petrol or petrol-electric underfloor-engined passenger model was launched but unsuccessful but made until 1932 over the next two years, and a new generation launched toward the end of 1932.
By 1937 this range included models for up to 45 passengers, some with automatic transmission but production halted in 1942 to cope with wartime requirements.

In 1945 eventually resuming as the ACF-Brill .The ACF-Brill name was used for an underfloor-engined, Hall-Scott-powered passenger design with optional Spicer hydraulic transmissions, built by the ACF- Brill Motors Co, this was subsidiary of the American Car & Foundry Motors Co (ACF) up to 1953.

The company then was re-named as ACF Industries, Inc, from the mid 1950s on.