Commercial automotive manufacturer of Newark, Ohio.USA From 1918 to 1927. 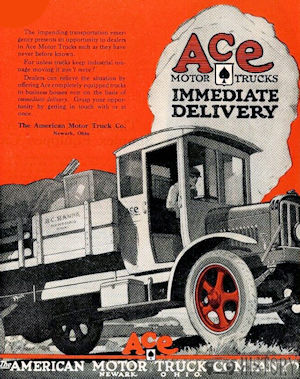 Ace commercials were assembled by the American Motor Truck Co, Newark, Ohio, and were occasionally known as the American.

Starting with a Buda engined 2 1/2-tonner, the line was quickly epanded to include models from 1 1/2- to 3-ton capacity.Timkin-Detroit front axel and Timkin-David Brown rear axel with Hotchkiss drive.Dayton cast steel wheels with Firestone tyres.Standard equipment featured Westing electrics including self starter. Prices started at £3100 to $5050 for the heavy trucks.

A unique feature being headlamps which turned with steering, the Passenger type models from 20 to 32 seaters were also offered, some with low-loading chassis and underslung axles, one of these forming the basis of a special passenger model which was built by the Royal Coach Co during the years of the 1920s.