South Bend United States of America from 1970 on. 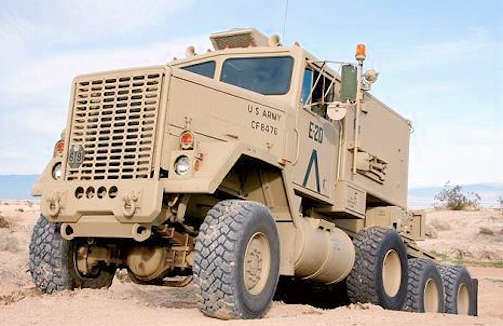 AM General LLC is an American manufacturer of utility and military vehicles and passenger cars .

Headquartered in South Bend , Indiana , the company is best known today as the developer and manufacturer of the HMMWV military vehicle and civilian offshoot Hummer H1 . In addition to the HMMWV produced the company in its only plant in Mishawaka the SUV Hummer H2 for General Motors . AM General also provides spare parts and maintenance training for all products, as well as technical support and spare parts for military vehicles other than the HMMWV.

The origins of AM General stem from Studebaker's "General Products Division" , which was bought together with lucrative armaments orders from Kaiser Industries when Studebaker withdrew from the automotive industry in 1966., Kaiser also pulled out of the automotive industry back, and the American Motors Corporation (AMC) acquired Kaiser Jeep from Kaiser Industries . In 1971, AMC transformed the General Products Division into its subsidiary AM General Corporation. The intent was to give AM General the independence needed to reliably execute government contracts for commercial vehicles. AM General produced buses, trucks and off-road vehicles for military, government and commercial customers.

In 1979, AM General began on behalf of the US Army with the development of a suitable 1.25- tonne multi- purpose SUV , which should replace the M151 and other light unarmored wheeled vehicles. After a delivery of test vehicles in 1981, the company started in 1983 with the series production of the HMMWV .

After AMC was acquired by Renault in 1982 , AMC was forced to relinquish the AM General Corporation because US government regulations forbade it to award arms contracts to companies owned by foreign governments - the French government was a part owner of Renault at the time. In 1983, AM General was acquired by LTV Corporation and a wholly owned subsidiary of LTV Aerospace and Defense Company. In 1984, AM General's headquarters moved from American Motors AMTEK Building to Livonia , two years later to South Bend, where the main manufacturing plant was located.

In 1989, AM General ceased its remaining operations in the field of light commercial trucks and closed the plant on Chippewa Avenue (South Bend), which was acquired in 1964 by Studebaker's predecessor Kaiser-Jeep. In 1990, the office buildings were relocated from Chippewa Avenue to the city center of South Bend, where they have since been located.

However, the HMMWV enjoyed great popularity among US soldiers during the military action in Panama (1989-90) and especially during Operation Desert Storm in 1991. In Iraq, about 20,000 HMMWV were in use. The popularity of the military vehicle in these military operations in public encouraged AM General to produce in 1992 a version of the vehicle called the Hummer , which had been converted for the civilian market .

In 1999, AM General founded the subcontractor General Engine Products LLC (GEP) and set up a new plant in Franklin, Ohio to produce 6.5-liter diesel engines . The engines are sold to General Motors and other customers and used for AM General vehicles.

In December 1999, AM General and General Motors reached an agreement on the common production, marketing and distribution policy regarding the Lobster. GM took over the world-exclusive rights to the brand name Hummer and renamed the vehicle Hummer in Hummer H1. In 2002, AM General began to produce GM's Hummer H2 SUV in a new factory in Mishawaka. In June 2006, the production of the Hummer H1 was discontinued, the H2 was still produced until 2010 for GM. AM General used the thus released production capacities for the production of the HMMWV.

In 2002, AM General transformed its business into a limited liability company (llc.). In August 2004, MacAndrews & Forbes Holdings and the Renco Group announced the formation of an owner community with the aim of acquiring AM General LLC . In 2007, AM General founded with General Dynamics Land Systems, the Joint Venture General Tactical Vehicles to the tender of the US Army and the Marine Corps for the development of the Joint Light Tactical Vehicle (JLTV), which will partly replace the HMMWV in the two forces. In 2010, AM General delivered the last 2600 Humvees to the US Army, completing its total requirement of 150,000 HMMWVs.

From spring 2015 to September 2017, AM General produced the R-Class from Mercedes-Benz as a contract manufacturer .