AAR Eagle Race car manufacturer of United States of America from 1965 to 1995. 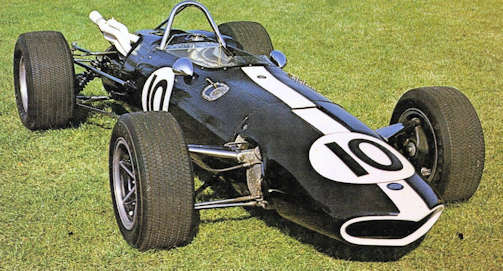 AAR Eagle refers to racing cars from the 1960s to the 1990s, built in the  United States by the team of Dan Gurney.

The abbreviation AAR was initially for the American US Gurney along with former racing driver Carroll Shelby founded companies All American Racers , participated in the Shelby 1965 to 1970 in the US. Under the leadership of Gurney, who was previously successful as a Grand Prix driver, a parallel company under the name Anglo American Racers was built in Rye, England , to be present in the European racing series. Tire maker Goodyear acted as lender, with the intent to break the longtime dominance of Firestone as a tire supplier in the Indianapolis 500 miles .

In the late 1960s, the team in the US began to celebrate its first major successes. In 1968, Bobby Unser won the 500 miles of Indianapolis and the series, opening Goodyear's door to American motorsports. Until 1986, Eagle delivered two more Indy500 victories, and vehicles for the US Monoposto series. Then Gurney initially turned his back on the singles and became a Toyota partner to prepare and accompany their appearance in the sports car scene. After the 1999 CART season, the construction of single-seaters was finally abandoned.

The first design for an Eagle Formula 1 car came from Len Terry . The vehicle was designed so that it could be used both in Formula 1 and  with adaptations  in the USAC series. Terry followed the Lotus 38 in the line . The car, which ran under the name Eagle T1G , had a light metal monocoque and a suspension with double wishbones . Gurney ordered a V-12 engine from the Weslake engine builder, bridging the time to completion with a 2.75-liter Climax-Engines. These were already discontinued models, the vehicle was therefore underpowered at the beginning. Nevertheless, it was enough to first World Cup points in the Grand Prix of France in 1966, when Gurney ranks fifth.

The Weslake 3-liter engine with four overhead camshafts was more successful. He came in 1966 for the first time in Monza at the Grand Prix of Italy used. The gearwheel problems, which occurred for the first time in Monza, could not be completely solved later. The engine had enough power, however, the production was never geared to series and all engines remained unique. The team always had to deal with the different engine power of the engines and the parts could hardly be exchanged from engine to engine. Only when Gurney took over engine manufacturing and maintenance in his own factory, the problems were solved.

The big day for the team was the Belgian Grand Prix in 1967, just a week after Gurney's win at Le Mans. Gurney won with the Eagle-Weslake the first and only World Championship race for the team.

As the activities increasingly shifted to the US, the involvement in Formula 1 declined rapidly. The 1968 season was denied without much success with a slightly improved version of the T1G. Meanwhile, the freely available Ford Cosworth V8 became the standard engine in F1, and many teams built their own cars. In 1969, Tony Southgate worked on a new vehicle, but never finished. The last Grand Prix for an Eagle was the 1969 Canadian Grand Prix , the two subsequent races in North America were abandoned, Eagle withdrew completely from Formula 1 and focused on the United States.

Gurney's Eagles won with Bobby Unser the Indy 500 in 1968 and 1975, with Gordon Johncock in 1973. Dan Gurney developed the Gurney Flap in 1971 during tests of his Indycar team , a spoiler on the rear wing that increases the downforce. A total of 51 Champcar races were won until finally retired after the 1999 CART season of the one-seaters. In 1968 and 1969, the team won the US Formula 5000 Championship with the Eagle Mk5 .Later between 1987 and 1995, Gurney sat in cooperation with Toyota sports cars in the IMSA series.