Automotive manufacturer of Jacksonville, Illinois USA from 1895 to 1896. 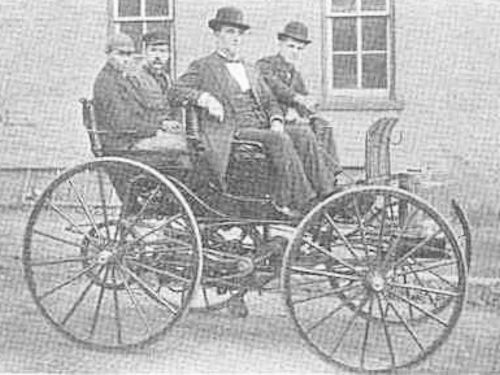 John W. Hall & Sons was an early Automotive manufacturer in 1895 in Jacksonville, Illinois company that produced wagons and carriages.

The vehicle was built by John W. Hall & Sons in 1895 in Jacksonville, Illinois . The company actually produced wagons and carriages, but planned a small series of Gasoline Traps .The Hall Gasoline Trap is an American automobile prototype from 1895, which was named after a conversion the following year Decatur . Trap originally referred to a light, multi-seated coach . The vehicle weighed about 320 kg and was designed as a highwheeler with extra large carriage wheels. It had space for four people, with the rear passengers either conventionally could sit as in a tonneau , or with the back to the direction of travel ( dos-à-dos ). Weak point of the construction well-executed was purchased motor from Kane-Pennington , who was too inefficient with 4 hp (according to former calculation method), significantly more weighed than those given just under 23 kg  and was anything but reliable; its designer Edward Joel Pennington has a reputation as a charlatan and cheater.

The following year, the Gasoline Trap was sent to Decatur for conversion. CV Walls from Decatur's Gasolene Engine Company found that the structure needed to be strengthened to allow for a more powerful drive. This work was done in the summer of 1896. The technically interesting solution now provided two Decatur engines with 4 hp each (according to the former calculation method). Walls noted that on "good roads" 15 mph (about 24 km / h) were possible. He climbed at 3 mph (about 4.8 km / h).Ultimately, both Hall and Walls decided not to market the vehicle.