Car manufacturer of Buffalo, New York.United States from 1902 to 1919. 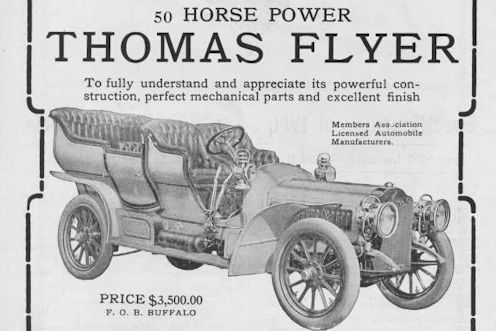 In 1900-1902, having previously made engines and motorcycles, the company embarked on car production. From 1902, when the first twin-cylinder was produced. The first Models were the Model 17  the company gradually went from three- and four- up to six-cylinder engines. From 1905 the cars were sold under the name Thomas Flyer.
The 6-70 Thomas model pictured was fitted with a six-cylinder square engine with bore and stroke dimensions of 140 x 140mm. The engine had a capacity of 12,936 cc. The engine power of 52.9kW (72hp) was transmitted through a four-speed gearbox to the rear axle via a propeller shaft. The less powerful Thomas Touring model used chains for the rear wheel drive.

On February 12, 1908, the anniversary of President Abraham Lincoln's birthday, some 50,000 people gathered in New York City. They were there not to celebrate Lincoln's birthday, but the start of the New York- Paris run covering 2092 km (13,000 mi) across three continents.
Six automobiles started in the race: the American Thomas, the German Protos, the Italian Zust, and three French entrants — de Dion, Motobloc, and Sizaire Naudin. The winner of this venturesome marathon, which included a run across Siberia, was George Schuster in his Thomas Flyer 6-70. He covered the distance in 168 days.
From 1909 Thomas ran our of luck, and Eugen Meyer became interested in the company. But even he could not save this manufacturer of quality cars from deterioration. In 1919 the Thomas cars came to an end.