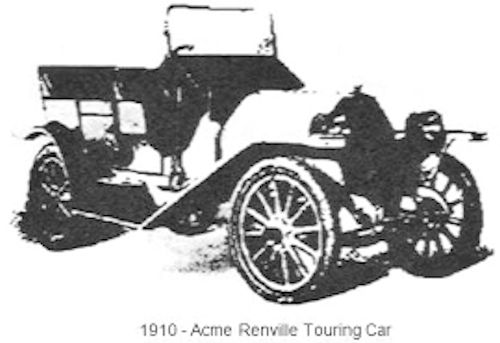 Motor Buggy Manufacturing Company was an American manufacturer of motor vehicles in the earl part of the 20th century. The brand name was first Acme .

The company was founded in 1908 in Minneapolis , Minnesota . In the same year began the production of automobiles.

The sales were not satisfactory. Therefore, the brand name was changed from 1909 to MB . In 1909, 25 vehicles were sold. In 1910 the production number was doubled.

End of 1910, the additional brand Renville was introduced for a more modern model . Of these, 10 vehicles and 50 trucks were sold. At the time, Nels Nelson was President, MJ Jacobson General Manager, and Arnold Hoffman Treasurer. Hoffman was from Renville , Minnesota.

In 1911 the production ended. In 1912 the brothers Hoffman took over the company. They manufactured from 1913 under their own name commercial vehicles .

As the Brand name Acme

The only model was called Roadster . It was a highwheeler with solid rubber tires . A two-cylinder engine with 22 hp powered the rear axle. The chassis had 246 cm wheelbase . The open structure offered space for four people. The rear seats could be removed and replaced with a cargo box. The curb weight was indicated at 726 kg and the top speed at 40 km / h.

The previous model Roadster was still in the range. There was also a touring car with four seats on the same base.

The vehicles were built lower and no highwheeler anymore. They also had pneumatic tires . A four-cylinder engine with 45 hp power drove them. The wheelbase was 259 cm. The construction was a touring car with five seats.