Automotive manufacturer of San Leandro , California.United States from 1983 to 1985 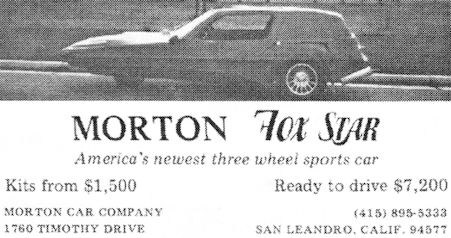 Morton Car Company was an American manufacturer of kits and automobiles in the 1980s .

The company was founded on November 7, 1983 in San Leandro , California . The production of cars and also as kit cars began. The brand name was Morton .1985 ended production.

The only model was the 3 , also called Fox Star . This was a 3 wheel car with front individual wheel. The basis was a tubular steel frame. The body of the coupe was made of fiberglass . Striking were the gullwing doors , which could also be removed.Kit cost $1,500 ready built $7,200

Various air cooled engines of Porsche and Volkswagen in the rear drove the vehicles.