Automotive manufacturer of Milwaukee.Wisconsin.United States from 1905 to 1914 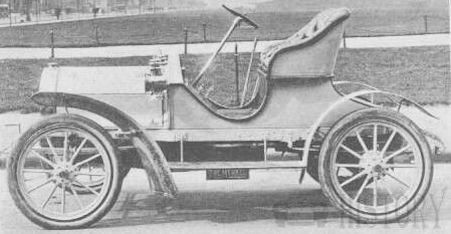 The Merkel Motor Company was an American manufacturer of motorcycles and automobiles. The brand name was Merkel for the automobiles.

Joseph F. Merkel  took over in 1901, the Layton Park Manufacturing Company in Milwaukee ( Wisconsin ) and led the company with his Merkel Manufacturing Company  together. In September 1904 it was reorganized as Merkel Motor Company . After the takeover by the Light Manufacturing and Foundry Company 1909, a move to the new owner's headquarters in Pottstown (Pennsylvania) . Here only engines and two-wheelers were manufactured, the latter first as Merkel-Light and from 1910 as Flying Merkel

Production of automobiles  began in late 1905. Three models in the middle and upper price range appeared around the same time. All had four-cylinder engines from 14 to 40 hp , cardan drive and were right-hand drive with large 12 spoke 32" wheels; the customer had the choice between water and air cooling .With a price of US $ 3500 was the Merkel top model Form N 35/40 HP .The end of production is around 1907.

Joseph Merkel tried again in 1914 as an independent automotive designer. His new vehicle was a small car, which was called Cyclecar , While the tandem seating arrangement with driver and front passenger was not unusual at least in contrast to side by side, four-cylinder engines were rarely used, as in the Merkel. The wheelbase was almost as large as that of his former car with 2438 mm standard P . These specifications and the solid construction resulted in a high cycle weight of about 480 kg for a cycle car and a calculated sales price of US $ 520 - almost twice as much as some highwheelers and well over US $ 100 more than one customer was accustomed to investing for a vehicle of this class. Merkel was not able to find prospects for the production and so it remained with two assembled in his basement prototype .