Automotive manufacturer of Anderson , Indiana.United States from 1915 to 1919 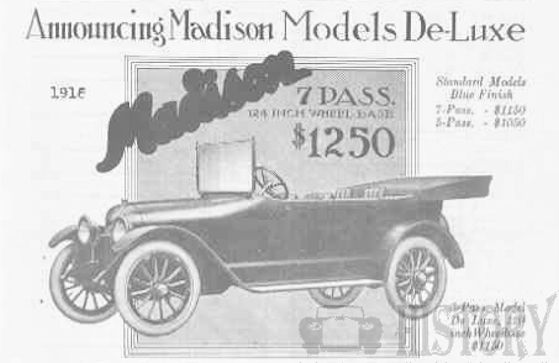 Henry Nyberg operated the Nyberg Automobile Works until the dissolution. Cecil Gibson had experience in the automotive industry with the Empire Automobile Company . In 1915 they founded the joint venture Madison Motors Company in Anderson , Indiana . The production of automobiles began, which were marketed as Madison . In October 1916, it was renamed Madison Motors Corporation . In 1918 production came to a standstill. 1919 were still three vehicles. In total, there were 453 vehicles.The Bull Tractor Company took over the company.

All vehicles had a six-cylinder engine from the Rutenber Motor Company .

In 1915 there was the model Dolly . The engine was specified with 22 HP . The chassis had 305 cm wheelbase . Models were touring cars with five and seven seats and a roadster with two seats.

In 1916 it became the model 6-40 . The only change was the introduction of another touring car.

For the model year 1918, only the Light Six is handed down. The wheelbase of 292 cm corresponded to the shortest model last year. Available were five- and seven-seat touring cars and a four-seat roadster.

In 1919, the offer consisted only of the model 6-19 . Engine and wheelbase corresponded to the Light Six . The only structure was a touring car with five seats.