Automotive manufacturer of Lincoln , Ill.United States from 1907 to 1909 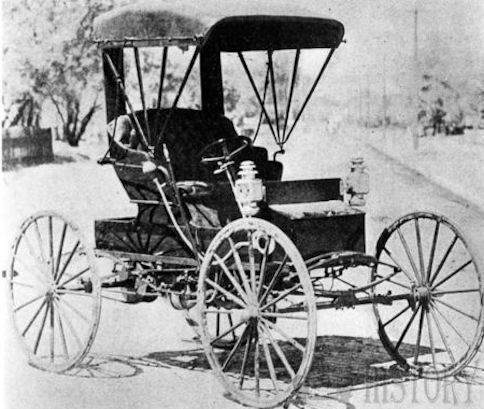 Lincoln Automobile Company was an American manufacturer of automobiles in the early part of the 20th century.

The company was founded in 1907 in Lincoln , Illinois . Involved were William Bates, Robert M. Berry, William Fogarty Jr. and LW Walker. After several prototypes began in early 1908, the series production of automobiles. The brand name was Lincoln . In 1909 the production ended. The company went bankrupt .

The company made Highwheeler . Typical were the air-cooled two-cylinder engine , the planetary gear , solid rubber tires and right-hand drive Unusually, the choice was between chain and cardan drive , while other highwheeler predominantly used chains.

The Model A was the weakest and shortest vehicle in the range. The engine was specified with 10/12 hp . The chassis had 183 cm wheelbase . The construction was called buggy .

The Model B had an engine that was specified with 16/18 hp. The wheelbase was 208 cm. The vehicles were bodyworked as a runabout .

The Model C was identical except for the construction as Surrey .