Lescina Automobile Company was an American manufacturer of automobiles .

The company produced in early 1916 in a Chicago plant several vehicles. They were presented at the New York Automobile Show the same Year . Subsequently, the series production began in Newark in New Jersey . The brand name was Lescina . End of 1916, the production came to a halt. In January 1917, the company was dissolved. Overall, only a few vehicles produced.

The model G consisted of Express Car , Model H as a luxury delivery van and Model J as a Cloverleaf Roadster .

The Series Model V  Chassis had a six-cylinder engine . The chassis had 318 cm wheelbase . Model E and Model I were each touring cars with seven seats.

The Model W series Chassis  had a four-cylinder engine with 30 hp . The wheelbase was 284 cm. Known are Model C as a convertible , Model D as a touring car with five seats and Model F as a luxury roadster. 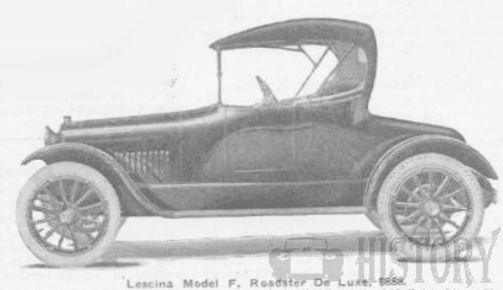 The Series Model X Chassis  had a weaker four-cylinder engine with 25 hp. The wheelbase measured 269 cm. Legend has been given to Model A as Utility Roadster and Model B as touring car with five seats.