Automotive manufacturer of Fremont , Ohio United States from 1907 to 1915. 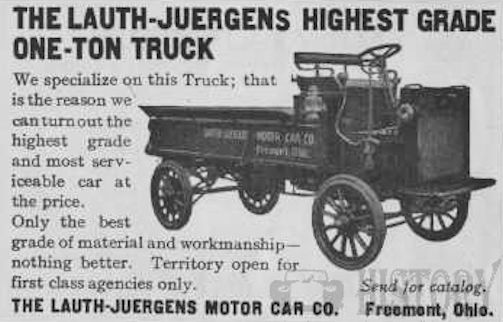 Lauth-Juergen Motor Car Company was an American manufacturer of motor vehicles from the early part of the 20th century.

Chicago-based Jacob Lauth in Illinois had produced two prototypes in 1905 and was looking for a financier. Together with Theodore Juergens in 1907 he founded the company in Chicago. The production of automobiles began. The brand name was Lauth-Juergens . The first vehicle was in December 1908 at the Chicago Automobile Show . 1909 ended the car production.

In 1910, the headquarters was relocated to Fremont , Ohio . Now emerged commercial vehicles . In 1915 the company was dissolved.

The vehicle from the exhibition had a four-cylinder engine with 40 hp .