Automotive manufacturer of Milwaukee , Wisconsin.United States from 1901 to 1905. 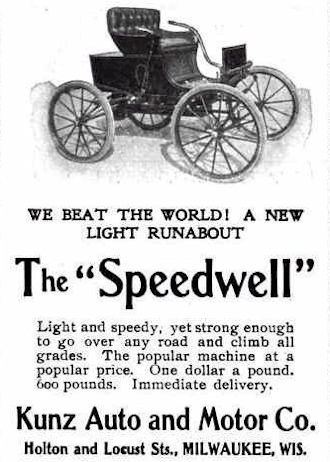 Kunz Automobile Company was a manufacturer of automobiles in Milwaukee in the US state of Wisconsin in the early part of the 20th century .

The company was the founded at the end of 1901, by John L. Kunz and produced from 1902 to at least 1,905 runabouts and roadsters . In the years 1903 and 1904 they acted under the name Speedwell Automobile Company  of Milwaukee. In 1905 returned to the original brand name, but stopped the production of cars after that.

Kunz, born 1866 in Appleton (Wisconsin) , had already built a first automobile in 1897, which he was able to sell the following year. He moved to Milwaukee and opened a successful mechanical workshop. In late 1901, he established the Kunz Automobile Company and resumed automobile production. Shortly thereafter, the renaming was done in Kunz Automobile & Motor Company and a few months later in Speedwell Automobile Company . In 1903 and 1904 his automobiles were sold as Speedwell . A final reorganization took place in 1905, when the company recapitalized with US $ 75,000 and into JL Kunz Machine Companywas renamed; The vehicles were now marketed again as Kunz . The production was purely manual. According to own data developed 1904 only twelve Speedwell . A planned output for the spring of 1905 of 100 vehicles should not have been achieved by far. Kunz then gave up automobile production and concentrated on his workshop. In 1917 he changed the company name one last time in Kunz Wheel Company and introduced self-developed cars and trucks - wheels of resilient sheet steel ago.

The 340 kg Kunz Runabout from 1902, with a " Dos-à-dos " additional seat in the rear with sitting direction to the rear, had a water-cooled single cylinder - four-stroke engine , the inlet of which was located above the exhaust valve and the 4½ hp . The engine was typically mounted under the driver's seat. The car had a sliding wedge -called transmission of own construction having three forward gears and one reverse gear. by drive chain transfer. According to the company's own advertising, the car should be able to handle 175-200 miles (280-320 km) of fuel in one full tank. It was steered, as with the runabout built in 1901 without additional seats, with a long steering lever , which acted on the front axle.

The Speedwell Roadster of 1903 was again a contemporary typical small two-seater buggy-style and a further development of Kunz with stronger single-cylinder engine, which now made 8 horsepower . The apparently inadequate sliding wedge gearbox was no longer used; the drive was instead a two-speed planetary gear and a chain on the rear axle. The wheelbase was 1727 mm (68 inches).

While the predecessor models were clearly reminiscent of the carriage construction, the now again Kunz called car of 1905 was greatly improved. Although the 8-horsepower engine remained under the seat, but the radiator was moved from the floor of the car to the front of the vehicle. Instead of the bulkhead, there was a storage space behind the radiator, which made the appearance much more modern. The wheelbase grew to 1829 mm (72 inches), and instead of the archaic steering by means of cow-tail lever, there was now only a little more modern. The steering movement was transmitted via a linkage by means of a short lever mounted vertically on the right side of the seat. The price has been reduced to US $ 675.