Automotive manufacturer of Dansville, New York.United States from 1907 to 1909. 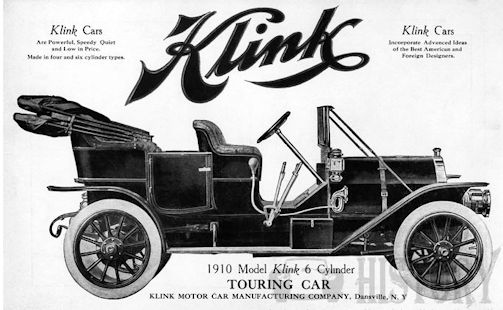 Klink Motor Car Manufacturing Company was an American manufacturer of automobiles in the early part of the 20th century .

John F. Klink and Charles Day founded the company in March 1907. The head office was in Dansville in the US state of New York . Harvey Toms also worked in the company. In May 1907 began the production of automobiles. The brand name was Klink . In October 1907, three vehicles were presented at the New York Automobile Show .

In July 1909 Day left the company. On September 25, 1909 Klink closed the factory. In 1910 he still tried to complete two vehicles from existing parts, but this did not succeed. In 1910 the company was dissolved.

In total, about 20 vehicles were created.  The last two vehicles from 1910 that were never completed, ended 1934 on the junkyard .

The vehicles had engines from the Continental Motors Company . First, there were four-cylinder engines and later six-cylinder engines . The gears and rear axles came from Brown-Lipe and the bodies from Buffalo .

In 1907, there was only the Model 30 . The four-cylinder engine made 30 hp . The chassis had 274 cm wheelbase . The choice was a touring car with five seats and a roadster with four seats.

In 1908 this model received a longer wheelbase of 284 cm. The Model 40 supplemented the assortment. It had a four-cylinder engine with 40 hp. The wheelbase was 305 cm. The open touring car offered space for seven people. In 1908, a vehicle won the third place among 25 participants in a mountain race in Hornell .

In 1909, the wheelbase of the Model 30 was reduced to 279 cm. The Roadster had only three seats. The touring car remained unchanged five-seater. New was the Model 35 with a six-cylinder engine and 35 hp. The wheelbase measured 302 cm. The superstructures were roadster with four seats and touring car with five seats. 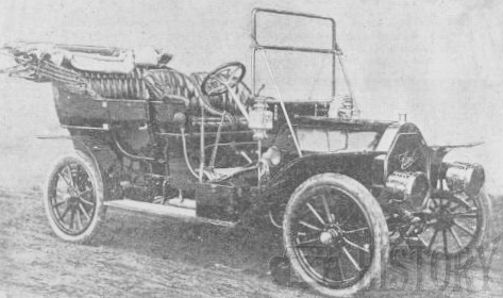