Automotive manufacturer of Buffalo , New York United States from 1899 to 1904.

Kensington Automobile  Manufacturing Company was an American manufacturer of automobiles from the late part of the 19th and begining of the 20th century in New York.

The company emerged in 1899 from the Kensington Bicycle Company . The seat was in Buffalo in the US state of New York . In August 1899, the first electric car was completed.

The brand name was Kensington . In 1901, steam cars were added. In 1902 there was an agreement with Darracq for license production, which was not carried out. In the same year, nevertheless, a model with a gasoline engine appeared . Antoine Fils et Compagnie from Belgium was the engine supplier. From 1903 there were only gasoline cars. 1904 ended the production.William Knowles, the president, then founded the Knowles Automobile Manufacturing Company in the same city.

The electric cars of the years from 1899 to 1902 were  as Stanhope body .The steam car of 1901 was a runabout . The steam engine had two cylinders and made 4 hp . In 1902 there was the Steam Vehicle No. 1 as Runabout and the Steam Vehicle No. 3 as Surrey .The gasoline cars from 1902 to 1904 had an air-cooled two-cylinder engine with 12 hp. was mounted in the front of the vehicle with flexible drive shaft and 37 miles a hour top speed. The chassis had 183 cm wheelbase. The construction as Tonneau offered space for four people. 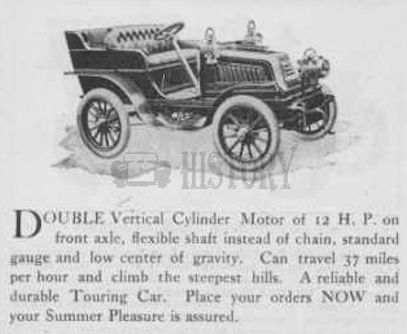