Automotive manufacturer of Chicago , Illinois.United States from 1910 to 1912.

Kenmore Manufacturing Company was an American manufacturer of automobiles in the 1910s .

The brothers FA and JD Meidinger founded the company in 1910. The seat was in Chicago in Illinois . They started with the production of automobiles. The brand name was Kenmore . By 1912 ended production.Sears took over the company and used the brand name for other things.

The vehicles were some what similar to the highwheelers of that time. Tire size and pneumatic tires , however, corresponded to ordinary vehicles. The first vehicles had a two-speed planetary gearbox , which was replaced in 1911 by a conventional gearbox with three gears. 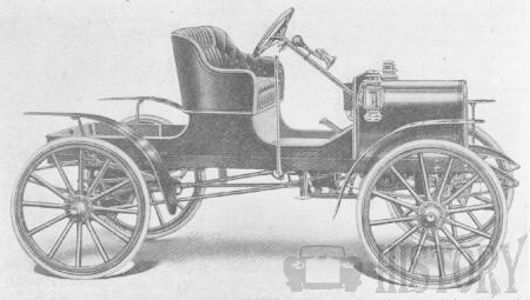 In 1910 there was the Model A with a two-cylinder engine and 14 hp . The wheelbase was 208 cm. Superstructures were a two-seat runabout and a three-seater roadster . The Model B had a more powerful two-cylinder engine with 18 hp, but the same wheelbase. It was available as a roadster with three seats and as Surrey with four seats.

In 1911 the engines remained unchanged. The wheelbase was extended to 221 cm. The Model A was as a runabout with two or three seats. The Model C was available as Surrey with four seats and as a roadster with two seats. The Model 30 . It had a four-cylinder engine with 30 hp. The chassis had 290 cm wheelbase. The construction was a touring car with five seats. 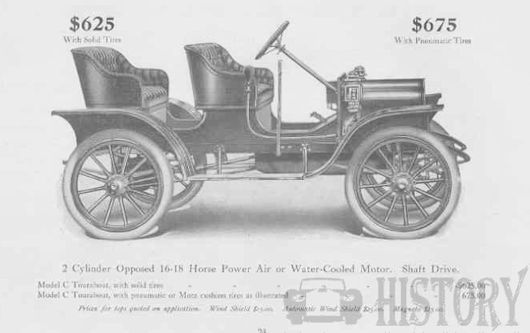 1912 were two models in the range. The Model C had a two-cylinder engine, which was specified with 16/18 hp. The wheelbase was 254 cm. As with the Runabout, Roadster and Tourabout . The Model D had a four-cylinder engine with 20 hp and the same wheelbase. The choice was Runabout and Roadster, and a  touring car.