Automotive manufacturer of Danville , Pennsylvania;United States of America from 1909 to 1928. 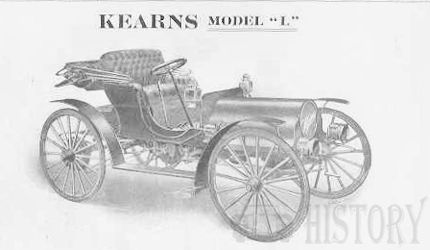 The Kearns Motor Buggy Company was an American automaker based in Beavertown, Pennsylvania . From 1909 to 1916 there were passenger cars and from 1909 to 1920 commercial vehicles built. From 1920 to 1928, it existed as a Kearns-Dughie Motor Company based in Danville, Pennsylvania , where chassis for fire trucks and complete trucks were manufactured.

The Eureka Motor Buggy Company had 1907-1909 a little successful highwheeler made in a version with two- or three-cylinder engine, which was, unusual in this category, located at the front under a hood and not under the seat. Initially, the smaller of the two, Eureka Model D 12/14 PS , was upgraded with virtually no adjustments and in the same premises. Until early 1910, the vehicles of the Kearns Motor Buggy Company were still sold as Eureka , then the brand name was changed to Kearns . The Eureka Model D became the Kearns Storm Queen Doctor's Special; unchanged the remained two-cylinder - two-stroke engineof the brand Speed-well with air cooling , the drive with friction and drive chain (s) and narrow but very large wooden spoke wheels with hard rubber tires. The price rose from US $ 650 to US $ 700. 1910 appeared a series of models with two- or three-cylinder engines, which were further purchased from Speedwell .

In the same year, Kearns turned to the construction of commercial vehicles and conventional passenger cars with four-cylinder four- stroke engines . It seems that last were built on chassis of the truck. 1913, an advanced pay system was introduced, which involved the workers in the company. The company hired the construction of the Highwheeler in the same year and now almost exclusively produced commercial vehicles. A market was recognized for cyclecars and built 1914/1915 with the Kearns Lulu a reputable designed model. With 1,557 cc engine capacity . It was as Roadster or Speedster available and resembled a scaled-down version of the Model T Ford . In 1916, the trio came out, a small car, on the customer's request with only four screws three different bodies - a roadster with 2 seats, a touring car with 4 seats or a delivery van - could be attached. Kearns Lulu and Trio were among the better offerings of its kind; they untypically even offered four-cylinder engines. When Cyclecars' sales in the US collapsed in 1916, the company relied entirely on the production of commercial vehicles and abandoned car construction.A first truck for a brewery had already been built in 1909. This had the air-cooled Speedwell -Dreizylindermotor, a friction gear, a drive with one chain per rear wheel and a steering wheel instead of the "cow tail" handlebar. From 1911 ran parallel to the production cars and at least since 1912, the customer could choose between air and water cooling as well. At the same time a reorganization of the company followed under the name Kearns Motor Truck Company . This division gained importance. 1914 appeared a 1.5-ton truck whose chassis was quite cheap at US $ 900. A larger truck with a chassis for US $ 1175 had a four-cylinder engine with 20 hp, three-speed gearbox and Hotchkiss drive, It seems that some of these chassis were carved as a car. From 1918 there was a light half tonner with Lycoming - and heavier trucks from 1 ½ tons with Herschell Spillman engines.

At the same time with a production transfer to Danville in 1920 was a reorganization as Kearns-Dughie Motor Company . In 1925 it came to a collaboration with the Foamite-Childs Corporation , a then-known manufacturer of fire extinguishers and fire departments. The production of trucks and fire engines ended in 1929 after Foamite-Childs had been taken over by American LaFrance the previous year and their fire engine construction had been shut down.