Automotive manufacturer of Glendale, California ;United States of America from 1948 to 1951. 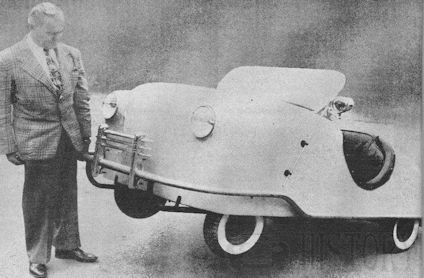 International Motor Products was an American automaker based in Glendale, California .The brand name was IMP.

. Founder was R. Stanley Griffin , a former cameraman of Warner Bros.There was built a small car called the Imp . This was an open two-seater with fiberglass body and tubular frame. The car was powered by an air-cooled, 7.5 bhp  single-cylinder engine installed at the rear with auto transmission. The car had 1829 mm wheelbase and was 2743 mm long.

Griffin had designed the IMP as a light small vehicle and could reach 35 mph. The price of the 250 kg car was $ 695. 1948 was only a prototype. In the following years, six more vehicles were built.