Automotive manufacturer of Plano , Illinois ;United States of America from 1910 to 1911. 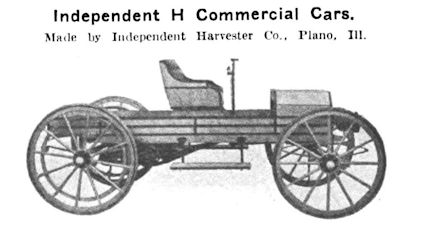 Independent Harvester Company was an American manufacturer of vehicles and agricultural equipment.

The company was founded in 1904 in Plano , Illinois . It at first made equipment for agriculture .In April 1910, HK Holsman joined the company, which previously led the Holsman Automobile Company . He transferred its patent rights to the company and became head of the department vehicle.

Between 1910 and 1911 cars were made. The brand name was officially Independent Harvester and unofficially IHC . An enterprise display for the vehicles uses only the long name. It should be noted that the competitor International Harvester in the same period very similar vehicles officially IHC .

1918 it came to the insolvency procedure. On April 24, 1918, the successor company Independent Harvester Company Ltd. was founded. Founded in the state of Delaware .

The offer included highwheelers . They were based on a model by Holsman. One model had an air-cooled two-cylinder engine rated 26 hp . The bodies were open with some built for comercial use. The original price was $750 US  .In addition, a four-cylinder engine  It was 133.35 mm bore , 63.25 mm Stroke , 3547 cc displacement , and 42 hp. The wheelbase was 241 cm.