Automotive manufacturer of Auburn, Indiana.United States from 1913 to 1914. 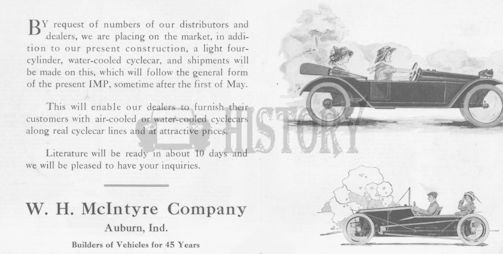 The Imp Cyclecar Company was an American automaker based in Auburn, Indiana and a subsidiary of the WH McIntyre Company , which manufactured larger automobiles ( Highwheelers ). 1913 and 1914 Cycle Cars and small cars were built there under the name Imp  The car was designed by William B. Stout , who had previously tried to build a cycle car under his own name.

The Imp was a tandem roadster (two seats one behind the other) and had an axle-less suspension, with the wheels attached directly to the ends of the transverse leaf springs. The brakes consisted of wooden blocks, which acted on the pulleys of the rear wheels. The Imp was powered by an air-cooled V2 engine . 85.725 mm boreand 95.25 mm stroke with 1099 cc displacement, The engine power of 15 bhp (11 kW) was transmitted via a friction disc transmission and belt to the rear wheels. The engine could be started from the driver's seat with a crank, which was used in the middle of the steering wheel. The starter shaft concentric with the steering shaft was connected to the crankshaft of the engine. The weight was 272 kg.  The price of the car was 375 US dollars .

Initially, 10 vehicles were produced during the week, but at the beginning of 1914, 50 vehicles were built per week. At the end of 1914, the parent company filed for bankruptcy and also put Imp Cyclecar Company into insolvency. Stout switched to Scripps-Booth . 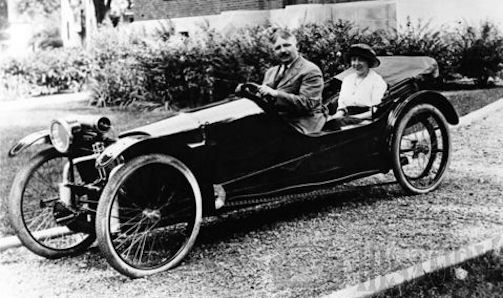