Automotive manufacturer of Dorchester, Massachusetts.United States from 1906 to 1907. 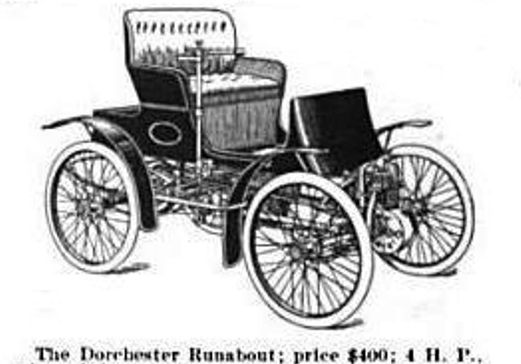 Hub Motor Car Exchange was an American manufacturer of automobiles in the early part of the 20th century .

The company was based in Dorchester , Massachusetts . At first it worked as a car dealer. In 1906, the factory of the dissolved Crest Manufacturing Company waspurchased. On the basis of the Crestmobile 1906 began the production of automobiles. The brand name was first Dorchester . The sales went bad. 1907 followed a better model, which was now marketed as a hub . It was presented in early 1907 at the Boston Automobile Show . In the same year ended the vehicle production.

The Brand name Dorchester: The only model was a simple version of the Crestmobile. An air-cooled single-cylinder engine with 4 HP power with 2 speeds drove over a chain to the rear axle. It was mounted without fairing above the front axle and directly in front of the dashboard. It was steered with a steering lever, which was long out of date in 1906. This was a light two-seat runabout . The empty weight was around 181 kg cost $400.00.

The Brand Name Hub: This model also had a single-cylinder engine. He was also air-cooled and under a hood . The engine power of 10 hp was transmitted via a planetary gear and a cardan shaft to the rear axle.