Automotive manufacturer of Pennsylvania United States from 1949 to 1950. 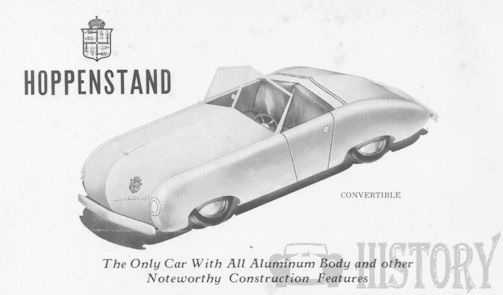 The Hoppenstand Motors, Inc. was an American car manufacturer, from 1949 and 1950 (Pennsylvania) in Greenville.

The Hoppenstand was a two-seat small car whose chassis had 2286 mm wheelbase and whose aluminum body was available in three versions: as a roadster , $590 as a convertible $790 and as a coupe $690 with two doors on a steel chassis.

It was powered by Firebug a two-cylinder air cooled engine of its own production producing 8.5 HP, whose power was transmitted via a hydraulic clutch and a hydraulic transmission to the rear wheels. The top speed of the economy car was 50mph  all with a 90" wheelbase and 12.5 tyres.