Automotive manufacturer of Indianapolis , Indiana. United States from 1912 to 1914.

Henderson Motor Car Company was an American manufacturer of automobiles in the 1910s .

The brothers CP and RP Henderson left the Cole Motor Car Company in 1912 . Then they started their own business in Indianapolis , Indiana . CP became President and Sales Manager, RP Vice President and General Manager and Chester Ricker Designer. They started the same year with the production of automobiles. The brand name was Henderson . In 1914, production ended when the money ran out. The brothers switched back to Cole.

WG Henderson, the son of one of the brothers, produced from 1911 Henderson motorcycles.

In 1914 there was the Light Four . The engine was now indicated with 27 hp. The wheelbase remained unchanged. Three- and seven-seater accounted for. Technically identical was the Deluxe Four , which was a bit more expensive and was also available as a three-seater coupe on offer. The top model was the Six . Its six-cylinder engine was specified with 34 HP. The wheelbase was 320 cm. Was available as a touring car with five seats and a roadster with two seats. 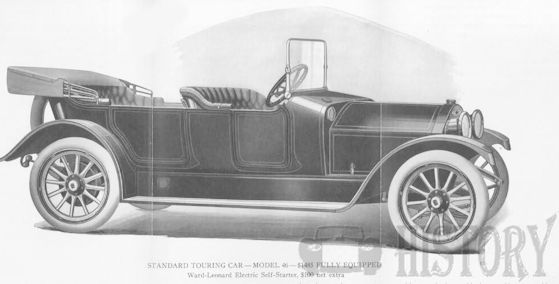