Automotive manufacturer of Piermont, New York; United States from 1899 to 1906. 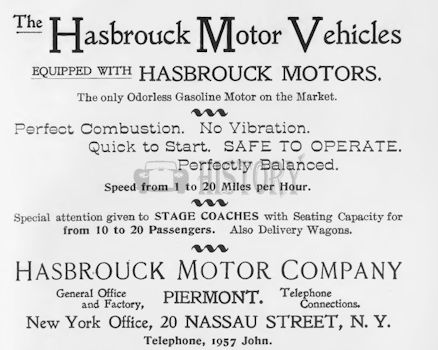 Hasbrouck Motor Works was an American manufacturer of automobiles at the turn of the 19th century.

The company was founded in March 1899 for the production of marine engines . The persons Wiliam H. Burchell, EJ Collins, Lemuel F. Dickerson, Joseph Hasbrouck, Stephen A. Hasbrouck, William H. Hassett, Carl F. Hermann and FO Matthiessen are mentioned. The seat was initially in Newark , New Jersey . In May 1900, the company moved to Piermont , New York . There began experiments with motor vehicles , especially buses and trucks . From 1901 a passenger car is handed down, which was successfully tested in April 1901.

In November 1901, the bankruptcy began . However, the financial problems could be overcome. In November 1902, two cars were delivered to South America . The brand name was Hasbrouck . Other vehicles would have been manufactured according to customer orders. Whether it came to this, is not known. In the same year ended the vehicle production. The workshop was continued.

End of 1902, the company moved to Yonkers and a few years later to New London in Connecticut . From 4 August 1906 an ad has been handed down. After that, the track of the company loses.

The prototype was a Phaeton with two seats. A single-cylinder engine with 6 hp output powered via a planetary gear and a chain on the rear axle.

The vehicles of 1902 were runabouts . They also had a gasoline engine .