Automotive manufacturer of Cincinnati , Ohio.United States from 1910 to 1932.

Haberer & Company was an American manufacturer of automobiles and coachwork in Ohio .

The German born Jacob Haberer founded the company in the 1880s in Cincinnati , Ohio . Initially, he produced carriages. 1910 began the production of automobiles. The brand name was Cino . In May 1913, car production ended after the flood of the Ohio River had flooded the factory. In 1916, a fire again caused damage to the factory. Car bodies were created until 1932.

1910 there was only the Model A . A four-cylinder engine with 40 hp power powered the vehicles. The wheelbase was 284 cm. As structures a pony Tonneau Touringcalled touring car and a roadster are handed down. 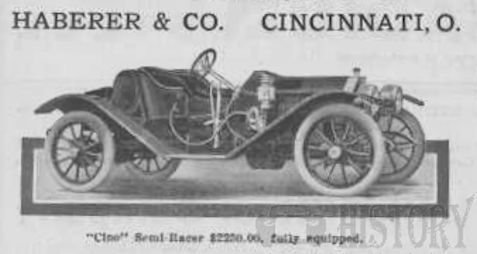 In 1912, the engine range was expanded, but reduced the number of bodies. The 50 HP had a four-cylinder engine with 50 hp. chassis had 297 cm wheelbase. The open touring car offered space for five people. The 60 HP had a six-cylinder engine that made 60 hp. The wheelbase measured 330 cm. The touring car had seven seats.