Automotive manufacturer of Oshkosh , Wisconsin ,USA From 1894 to 1902. 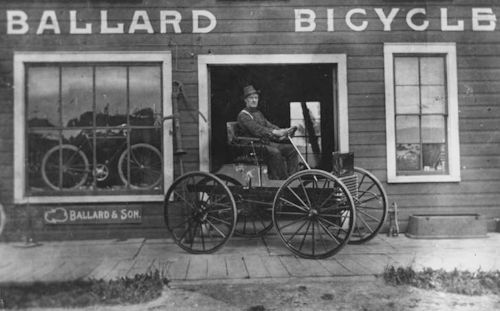 HC Ballard & Son was an early American manufacturer of automobiles from the early part of the 20th century.The brand name was Ballard .

AW Ballard had already manufactured Bicycles and individual automobiles since 1894. In February 1901, he founded the company in Oshkosh , Wisconsin . The production of automobiles was continued.  In 1902 the production ended.

The first vehicle of 1894 had a two-cylinder engine , which was mounted above the rear axle and driven by chains the rear wheels. It was steered with a steering wheel. The open body could accommodate two people.

The second vehicle was built in 1895. It had a steering lever. Ballard presented this vehicle at an exhibition. In addition, it was used in a race against horse with rider, and won.A doctor named Sauerherring then ordered a four-seat vehicle with lighting.

The vehicles after company founding resembled the single piece for Sauerherring. The body design Dos-à-dos offered space for up to four people. The engine was still mounted in the rear and drove the chains to the rear wheels. The maximum speed was stated at 22 km/h.