Automotive manufacturer of Peru , Indiana ,United States of America from 1910 to 1916. 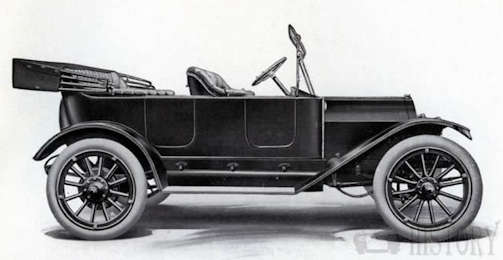 Great Western Automobile Company was an American manufacturer of automobiles in the 1910s. The brand name was Great Western .

EA Myers led the Model Automobile Company . On September 8, 1909, he founded the new company in Peru in Indiana . President was Milton Kraus. They began in 1910 with the production of automobiles. Bankruptcy began in August 1913 . Kraus retreated, Myers took over. In 1914 work began on a prototypewith a special engine that did not go into mass production. In 1915, the company signed a contract with the Rayfield Motor Car Companyto build vehicles for Rayfield, but could not comply with the contract and was sued. 1916, the proven four-cylinder model was replaced by a much weaker and cheaper six-cylinder model. By 1916 ended production.

1910 were three types of vehicles in four versions to choose from. All had four-cylinder engines . In the Thirty he made 30 hp . The chassis had 269 cm wheelbase . The Model 20 was a five-seat touring car and the Model 20 A a three- to four -seater runabout . The Forty had a 40-horsepower engine, a wheelbase of 290 cm and a model 21 as a five -seater touring car. Top model was the Fifty, His engine made 50 hp. The wheelbase of 310 cm allowed a body as a seven -seater touring car.

In 1911, the restriction looked at the mid-size model. Engine power and wheelbase remained unchanged. Are Narrated Roadster with three seats, demi-tonneau Roadster with four seats and touring cars, full- torpedo and semi-torpedo with five seats.

1915 was the next extension of the wheelbase to 310 cm. Several touring cars could accommodate four, five, six or seven people. There were four saloons and six seats. In addition, a roadster with two seats and a convertible coupe with four seats are called.

1916 replaced the Six with a six-cylinder engine from all previous models. His performance was stated with 21.6 hp. The wheelbase measured 300 cm. The only structure was a five-seat touring car.

Automotive manufacturer of Peru , Indiana ,United States of America from 1910 to 1916.
Updated
Saturday, 09 May 2020
Edited By
MCH