Automotive manufacturer of Philadelphia, Pennsylvania.United States from 1898 to 1900. 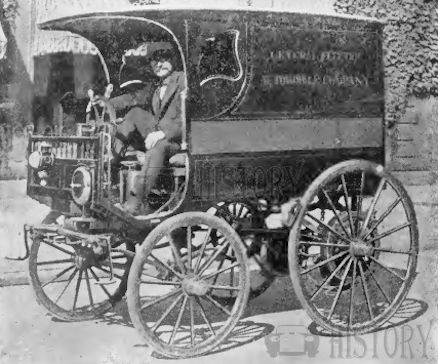 The company was on June 3, 1898 in Philadelphia, Pennsylvania established and maintained production facilities in Manyunck (Pennsylvania). The driving force behind the project, John A. Brill , connects to the JG Brill Company in Philadelphia, a leading provider of trams and later trolleybuses .

It appears that the vehicle originated in some sort of competition with the Orient Electric of the Waltham Manufacturing Company in Waltham, Massachusetts . General Electric's first president, Charles Albert Coffin , was involved with Waltham Manufacturing and insisted that an electric prototype be developed there in the second half of 1898 . Neither CEO Charles Herman Metz nor the commissioned technicians George M. Tinker and John W. Piperwere convinced of that; Metz began experimenting with internal combustion engines at the time, probably building the first gasoline-powered motorcycle in the US. Tinker and Piper were already working on a light steam car , which came in 1900 independent of Waltham Manufacturing as Waltham Steam in the sale. Ultimately , this internal resistance at Waltham Manufacturing eventually led to the founding of the General Electric Automobile Company and the transfer of its patent to a battery weighing approximately 700 lb (about 320 kg) over the market of 1000 lb ( 450 kg) was considered particularly light.

The electrical equipment Of these vehicles consists Of the following:
There are 44 cells of battery coupled in such a manner that for all normal work the cells are maintained in series, but for certain work, as in mounting very steep and short grades, or starting exceptionally large loads, the cells may be temporarily arranged in two sets, and these put in parallel. The batteries are automatical!y coupled up with the motor circuits on the vehicle, through the media of contact switches, by simply sliding the trays into the compartments. While the batteries are adapted to be removed from the vehicle for charging, sockets are provided for attachment plugs, so that the batteries may be charged while in place, and these plugs arc so constructed that it is Impossible to make a wrong connection or reverse the polarity.

The General Electric was available in four versions:

Doctor's Dos-à-dos, These phaetons for physicians and pleasure riding are in design between a doctor's carriage and a Stanhope, consisting ot a seat for two persons, with handsome upholstery andcushions side and back. The battery Compartment extends under the Seat and backward, with a drop-hinged door at the rear. Handsome lamps, both for electric light and candles, are provided on the sides of the body. The running gear consists Of two large rear and two smaller front wheels, all of wood, and having solid rubber tires. The front axle is carried upon springs secured to special iron extensions from the body, and the wheels are turned for steering by knuckle joints or side pivots, and moved by a steering ever extending upward through the body near the dasher, and leading backward toward the seat.

The favorable weight resulted in a competitive range of about 30 miles (50 km) for this early period . In terms of time, the sale was made via sales transactions that could acquire a representation. In Philadelphia and New York City, the vehicles were sold very successfully through Wanamaker's Department Stores by John Wanamaker .

In early 1900, the company got into trouble. After the debt exceeded US $ 50,000 and shareholders were unwilling or unable to repay further capital, General Electric Automobile Company closed. The battery patent was sold in July 1900, went for US $ 29,000 to James W. Cunningham from New York, who was possibly in conjunction with the James Cunningham, Son & Company in Rochester (New York) , in turn manufacturer of carriages and funeral vehicles; this company successfully experimented with electric vehicles around 1900 and sold them until at least 1908. Cunningham is a pioneer of the V8 engine and built a respected quality automobile until 1937.