Automotive manufacturer of Clintonville , Wisconsin.United States from 1908 to 1912. 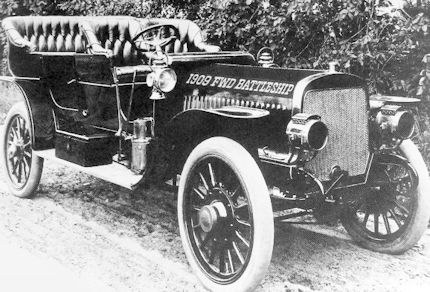 Otto Zachow and William Besserdich made in 1908 two prototypes . They founded the Badger Four Wheel Drive Automobile Company in Clintonville , Wisconsin , on January 9, 1909 with the financial help of WH Finney . In the same year began the production of automobiles. The brand name was initially Badger ,. In 1910 or 1911, the name changed to Four Wheel Drive Auto Company and the brand name in FWD . At the time, Walter A. Olen was the president. Now also commercial vehicles were born, In 1912, the car production ended after about twelve manufactured vehicles. In 1958, the name changed to FWD Corporation .In 2009, the acquisition by the Corsta Corporation .

Zachow and Besserdich developed a four-wheel drive . The first prototype was called Z & B , although obviously this was not the brand name. A steam engine powered the vehicle. The second prototype nicknamed Battleship (pictured above) had a gasoline engine with 45 hp power. Both vehicles were not marketed.

1910 there was the Badger FWD model 100 F . A four-cylinder engine with 55/60 hp powered the vehicles. The chassis had 325 cm wheelbase . The open touring car offered space for seven people.

In 1911 and 1912, there was also only one model in the range with the FWD Model A. The four-cylinder engine was now specified with 45 hp. The wheelbase had been extended to 340 cm. The choice was roadster , runabout and seven-seat touring car .

Along with cars, lorrys and also the United States Army used vehicles in the First World War  .