Automotive manufacturer of Middletown, Connecticut.United States from 1901 to 1909. 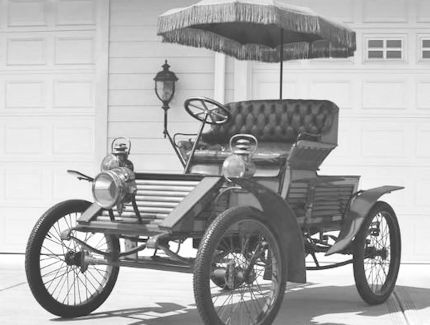 Russell Abner Frisbie belonged to the Frisbie family, which ran the Frisbie Pie Company and later became known as Frisbee . He ran in 1900 a small shop for bicycles in Cromwell in Connecticut . There he produced a motor vehicle . In September 1900, when it was almost finished, it was already reported. Plans for mass production negated Frisbie in December 1900. The vehicle was for its own use.

In 1902 he founded the Frisbie Motor Company in Middletown , Connecticut. He mainly produced engines for land vehicles and boats . In addition, six automobiles were created until 1909. The brand name was Frisbie . In 1909, the company already traded as Frisbie-Hoeft Company .

During the First World War , the company manufactured components for aircraft . Frisbie sold the company after the war. Nevertheless, he continued to care about the service of his engines, which were installed in many fishing boats around him. Frisbie made mechanical toys in the 1920s. He died in 1968.

The first vehicle is dated to 1901. It had a two - cylinder four-stroke engine . It was an open runabout with two seats and four wheels. The front of the vehicle was designed so that no engine could be accommodated there. The engine was either under the seat or in the rear of the vehicle. It was steered with a steering wheel . The vehicle still exists.

Around 1902, the second vehicle with a similar engine.In April 1905 it was reported that Frisbie had completed two six-cylinder engines. One drove a touring car . The other was delivered to A. Bruce Tucker for a motorboat. Other vehicles followed.

The last vehicle was built in 1909. In June it was tested on the roads. It had a four-cylinder engine .