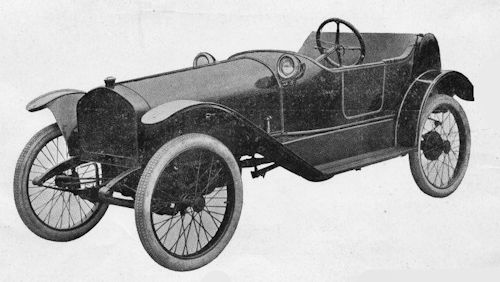 Flagler Cyclecar Company was an American manufacturer of automobiles in the 1910s. The brand name was Flagler .

Elias S. Flagler founded the company in Chicago in 1914 in Illinois . There he started producing automobiles.  A short time later, some businesspeople from Cheboygan , Michigan, invested in the company. AM Gerow became vice president and WL Hagadorn secretary and treasurer. The production was then moved to a factory in Cheboygan.

Although the first model was a Cyclecar ,  The two-cylinder engine had 85.725 mm bore , 101.6 mm stroke and 1173 cc displacement . This was specified with 10/12 hp . This drove over a friction gear and belt to the rear axle. The chassis had 229 cm wheelbase and 107 cm gauge . The vehicle was bodyworked as a roadster and could accommodate two people next to each other. The original price was $375 US dollars .

At about the time of the move to Cheboygan a new model appeared. The four-cylinder engine . This had 95.25 mm bore, 101.6 mm stroke, 2896 cc and 18 hp. An ordinary transmission and cardan drive made it clear that the vehicle was positioned above the first model. The wheelbase was 239 cm. The bodywork was also a two-seater roadster. The vehicle cost $ 450.

In 1914 the production ended. In total, about 100 vehicles were created.